Why a safer, healthier world is at hand

By Diane RegasFollow
Blogs about shared prosperity in a sustainable world.
Published May 23, 2016 in PoliticsHealth \ Chemicals

My eldest son Matt is a brand new dad. Holding his 11-month-old daughter, Cora, I feel a surge of hope for this new child and for the generations after her. They have the chance to grow up in a safer, healthier world.

This week Congress is poised to vote on a chemical safety reform bill that has been decades in the making. It’s an incredibly important moment for all American families wanting better protection from the potentially toxic chemicals that surround us.

It’s also a moment that tracks a professional and personal journey for me and my own children.

While Matt was growing up I learned to worry about whether I could protect him from chemicals that surround us – here is that story, and why I feel so hopeful for his daughter Cora, and for future generations.

In 1987, the year Matt was born, I started working at the U.S. Environmental Protection Agency. Freshly graduated in environmental science and law, I was thrilled. At the EPA we were working to clean up toxic waste sites – and I got to help make sure that hazardous wastes were no longer dumped willy-nilly.

The EPA acted under its relatively new toxics law to ban asbestos – protecting kids like Matt from this cancer-causing substance. That law, the Toxic Substances Control Act, held promise. It seemed like a turning point.

Matt’s brother Sam was born in 1990. I went back to work, and a few months later a federal court threw out the ban on asbestos – marking the end of real efforts to use TSCA to ensure that the chemicals around us are safe. At the EPA, it became clear that we couldn’t protect Matt and Sam from carcinogens in products.

No way to contain dangerous chemicals

A few years later Matt and Sam welcomed (mostly!) their new brother Robin. By this time I learned that all three of my kids – like all American babies – were born with industrial chemicals in their blood because of my own exposures.

I also began learning more about endocrine disruptors – chemicals that mimic and interfere with our hormones, and can result in abnormal development or disease.

As the kids grew I was eager to do more. I got the chance to work in the White House and helped put together an executive order designed to help protect kids from chemicals – but the order could not go beyond the existing law, so the larger problem still persisted.

When the kids left for college, I left the EPA for the Environmental Defense Fund. Here I began learning more about unknown and dangerous aspects of chemical exposure from my colleague (and neighbor), Richard Denison.

I also learned that leading scientists were documenting epigenetic effects of chemical exposure – meaning chemicals I had been exposed to might even affect my grandchildren.

My first grandchild Cora was born last year – with no more legal protection from chemicals than Matt had when he was born almost 30 years ago. Happily, hard work has been going on to change that.

The bipartisan legislation before Congress this week – known as the Lautenberg Act in honor of the late Sen. Frank Lautenberg – will for the first time begin a systematic review of all chemicals in use today for safety. It will also require that all new chemicals pass a safety review before they can be put on the market.

The EPA will have new authority to require chemicals to be tested and to restrict those found to present risks. The bill explicitly requires protection for those most at risk from toxic chemicals – including kids and pregnant women – and limits the overuse of “confidential business information” claims to hide information from the public.

Finally, the Lautenberg Act keeps all prior state actions on chemicals in place, which means that if your state has already restricted a chemical – banned it for a certain use, for instance – that this rule remains in force.

The bill allows many types of state actions on chemicals, supplants state authority to restrict a chemical only when the EPA takes up that same chemical for a full safety review of the same uses and risks, and provides for states to get waivers to act both during and after EPA review.

After two decades of working for reform, environmental activists, state policymakers, and all of those who made this happen should celebrate. Congress didn’t get it done in time for my kids, but I am deeply grateful that my grandchildren will grow up in a safer, healthier world. 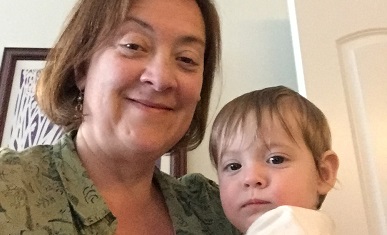 Diane with her granddaughter Cora.