Midwest floods can help restore the Louisiana coast. Here's how.

Flooding isn’t generally a good thing, but historically, large floods like the ones in the Midwest this winter helped build the Mississippi River Delta and its surrounding wetlands.

Rainwater from 31 states and two Canadian provinces drains into the river, carrying with it sediment – or more plainly, sand and dirt – from Midwest farm fields into the river and down to Louisiana. Over time, as the river snaked back and forth across the delta it deposited sediment like a leaking hose, creating wetlands.

These wetlands provide essential habitat for wildlife and birds, as well as critical storm protection for communities by helping to block storm surge and flooding. 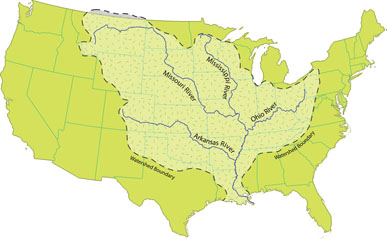 But by the early 20th century, the entire Mississippi River had been leveed for navigation and flood protection, straightjacketing the river and severing its tie to Louisiana’s coastal wetlands. That has meant that the sediment in the river cannot continue to support the land it built, but is instead shunted out into the Gulf of Mexico, where it settles uselessly to the bottom.

In large part because of this engineering of the river, since the 1930s Louisiana has lost nearly 1,900 square miles of land – that’s like the entire state of Delaware disappearing into the ocean. Every hour, Louisiana continues, on average, to lose a football field of land.

This land loss crisis is ongoing, leaving cities like New Orleans increasingly unprotected from storms and more vulnerable to the effects of sea level rise.

This winter’s opening of the Bonnet Carré spillway, a large flood control structure in the levee just above New Orleans, was one of the earliest on record, and over the past decade, the spillway has had to be opened more frequently as weather patterns across the country shift and contribute to increased rainfall and storms in the Midwest.

Spillways like the Bonnet Carré are critical for relieving pressure on levees burdened by swollen Mississippi River waters, and are miracles of engineering. But they are not designed to capture the sediment in the river for coastal restoration. We fail to take advantage of the most powerful land-building tool that we have – the Mississippi River.

We need a suite of solutions that not only relieve the pressure on water levels but also build resilience to the kind of extreme weather that is making our nation’s coasts so vulnerable.

Well-designed and strategically placed sediment diversions can help us use the sediment in the river more efficiently to help restore Louisiana’s coast.

Sediment diversions work by directing sediment and fresh water from the river into adjacent basins to build and sustain land. As the sediment compacts, it creates a base for plants to grow and thrive. These plant roots in turn help stabilize and support the new land.

In short, sediment diversions mimic the natural land-building process that once built the Mississippi River Delta thousands of years ago.

Last fall, the state of Louisiana made a commitment to move forward with two key sediment diversions in southeast Louisiana. When constructed, these diversions will help capture the sediment in the river and utilize it for coastal restoration.

And during future high-water events, spillways and sediment diversions will work together to prevent flooding and rebuild coastal wetlands by directing sediment from the river to areas that need it most.

We don’t need to choose between protection and restoration. But we do need practical solutions like sediment diversions coupled with flood control measures that will allow us to enjoy the full benefits of both.

3 ways to sustain water in the West

Non-governmental organizations such as The Environmental Defense Fund have a broad base of appeal to people that are concerned about the well-being of the environment. In this regard they participate in the role of providing public education - a role that in most other cases is regarded as significantly important enough to require some form of oversight and regulation. The importance of this role with regard to issues that involve science is brought into focus by the staggering degree of scientific illiteracy in this country. Last year the U.S. ranked 27th in international science testing. I believe this has less to do with a failure of our formal education system than it has to do with the proliferation of scientifically inaccurate publications presented in the form of public education that are outside of the oversight and regulations that guide our formal education system.

In the absense of any form of oversight or regulation the responsibility falls on each non-governmental organization to insure the veracity the scientific statements that it offers for public education. This essay is emblematic of the problem. Two primary statements of the essay are treated as factual when they are in fact scientifically inaccurate. These statements may lead to conculsions by the reader that are substantially different than what the reader might conclude if supplied with scientifically accurate information.

First, the impression is created that the sediment supply of the Mississippi River, which is being prevented from contributing to natural land building, has been constant since the 1930s. Quite the opposite is true. A network of locks and dams throughout the river system has served to dramatically decrease the sediment load of the river. The sediments carried by the river are not "shunted" into the Gulf of Mexico. In fact only a very small percentage of the sediment load makes it to the mouth of the river. Most of it is entrained within the channel upstream of New Orleans by a process called "backwater sequestration". This explains why the existing sediment diversion at West Bay and any of the natural openings of the river channel in the lower delta have failed to create any meaningful amount of new land even though they have full access to the flow (and sediment load) of the river.

Second, the coopting of the concept of losing "a football field an hour" from its original intent has created a completely inaccurate statement in this essay. The phrase originates from the text of U.S.G.S. Scientific Investigations Map 3164 - the "Land Area Change Map". In its proper context this study states that the total land loss in south Louisiana between 1985 and 2010 equates to an average rate equivalent to a football field an hour. It does not say that south Louisiana is currently experiencing land loss at this rate. The significance of confusing average rate and current rate may be illucidated by using the rate of inflation in the U.S. as an example. The average rate of inflation between 1985 and 2010 was about 2.7%. The current rate of inflation is substantially lower than that. This is important because if monetary policy were being created based on treating the average rate as the current rate, we would not properly address this issue, and we may even do harm to the economy.

This is the case with the current rate of land loss in south Louisiana. The same U.S.G.S. study showed that the rate of land loss has decreased significantly over the past two decades. The primary exception has been rather dramatic losses that occurred during Hurricanes Katrina and Rita. Two separate U.S.G.S. studies show that land loss during these events was very tightly concentrated in areas where river water was entering the marsh. The most obvious of these areas is at the outflow of the Caenarvon Diversion. It is not at all clear that diverting Mississippi River water into the coastal wetlands is a good thing. The decision to do so based on the contention that we are losing a football field an hour may be very much like a effects of a monetary policy based on the contention that the current inflation rate is 2.7%.

okay, so what is the right answer? is the aim of restoring the delta worth pursuing? How could that be achieved, if it could be achieved at all?

As far as the football field an hour statistic, the 1985-2010 data from which this analogy was drawn is the latest comprehensive data we have available, so it is the best guess of Louisiana's land loss rates. We are awaiting updated land loss data from USGS. If anything, that land loss rate could be an underestimation of our current crisis, considering climate change factors. If we evaluate predicted land loss rates from Louisiana's 2012 Coastal Master Plan "without action" scenario, land loss rates are anticipated to increase into the future. We also used the term “on average” so as to avoid the false precision that can come from an unqualified statement.

As for whether we can sustain land in the Mississippi River Delta, we think the answer is clearly yes. It is a system that has been under assault for decades, and we won’t restore it to what it once was, or likely even maintain the current footprint. But if we use all the tools we have available, and we act now, we can sustain a smaller Delta, and one that provides support and protection for most of the communities, small and large, that are here. To the roughly 2 million people who live here, and the millions more who benefit from everything here, including protected ports, global scale fisheries, energy resources and remarkable cultures, this effort is well worth it.

The fundamental tool for this effort is harnessing the natural land-building power of the river. We can do this by putting in place large-scale restoration solutions like sediment diversions to distribute the sediment in the river back into the shallow bays and marshes along the coast. These projects, used synergistically with other restoration solutions laid out in the master plan, will allow us to us the only force of sufficient scale to compete against sea level rise and subsidence. And that will make it possible to achieve the goal we are after – a sustainable Delta.

Sediment filling most of Lake Pontchartrain on January 26
Earthdata