Louisiana is facing a land loss crisis, but there are solutions to restore the region

Coastal Louisiana is home to nearly two million people, provides vital habitat for wildlife and birds, and contributes tens of billions of dollars to the national economy every year. The Mississippi River Delta is an economic engine for the state as well as the nation that depends on it for shipping, chemicals, energy, and seafood.

But coastal Louisiana is facing a land loss crisis. Since the 1930s, Louisiana has lost more than 2,000 square miles of land, or an area the size of the state of Delaware. Every 100 minutes, a football field of land disappears into open water.

These wetlands not only provide habitat for wildlife, birds and fisheries, they also help provide storm surge protection for cities and infrastructure. Without bold, large-scale restoration, Louisiana's coast will continue to disappear, putting people, wildlife, industries, and billions of dollars in economic infrastructure at risk.

Hurricane Katrina and the oil spill

In 2005, Hurricanes Katrina and Rita devastated Louisiana's coast and the city of New Orleans, causing more than 2,000 deaths and an estimated $150 billion in damages. Five years later, the BP oil disaster served another blow to an already degraded system. Urgent, large-scale restoration is needed to restore Louisiana's vanishing coast – to help buffer and protect the region from future storms and disasters.

Following the oil disaster, in 2012, Congress passed the RESTORE Act, legislation that ensures 80 percent of the Clean Water Act penalties BP and other parties pay as a result of the spill are dedicated to Gulf Coast restoration.

In 2015, BP agreed to pay more than $20 billion to settle remaining federal and state civil suits against the company for its role in the oil disaster - the largest environmental settlement in U.S. history. Under the agreement, Louisiana is poised to receive nearly $8 billion – or about half a billion dollars per year for the next 15 years – for coastal restoration and protection.

Louisiana's Coastal Master Plan is the 50-year blueprint for the state's coastal restoration and protection efforts. Rooted in sound science and updated every six years, the plan contains natural infrastructure projects such as marsh creation, barrier island restoration, oyster reefs and sediment diversions – projects that harness the natural land-building power of the Mississippi River to build and sustain land. The master plan also contains coastal protection projects such as levees and floodwalls, as well as community resiliency programs. Together, these projects will rebuild and sustain land along Louisiana's coast, provide storm protection for cities and infrastructure and help communities be more resilient.

Other efforts to restore Louisiana's coast also include Changing Course. For this international design competition, EDF brought together engineers and planners from around the world to create innovative visions for the Mississippi River Delta – ideas that take into account the needs of industries, communities and infrastructure while using the natural power of the river to build land. Ultimately, by adding these visions to the Coastal Master Plan planning process, we can create a sustainable lower Mississippi River Delta for generations to come. 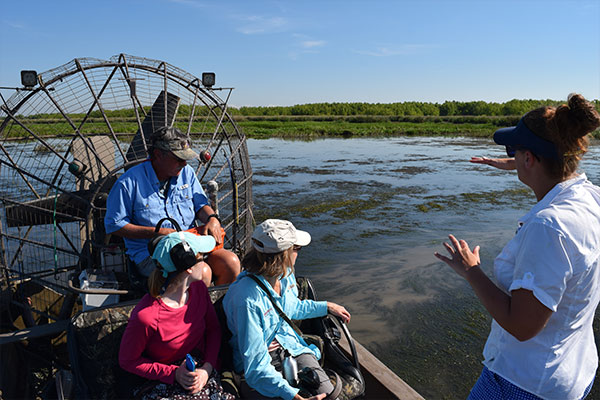