Americans ARE worried about climate change - they just don't realize it

By Shira Silver
Shira is a communications associate at EDF.
Published April 29, 2014 in ClimateHealthScience

Contrast this concern with that of the general public’s as shared in a recent Gallup poll. The poll asked Americans about their top worries, and found that while more than three out of four Americans (77-88 percent) said they worry a “great deal” or a “fair amount” about the economy, the federal deficit, and healthcare availability, climate change was near the bottom with 49 percent reporting similar levels of worry.

This isn’t so surprising considering research shows people tend to worry about things that feel closer to home, are imminent, and easy to understand, such as the economy and healthcare. But before jumping to the conclusion that Americans don’t care about climate change and its impacts, as some news stories suggest, we should consider that the real problem is setting up a false dichotomy by asking about climate change independently when in reality it impacts all of these priorities. 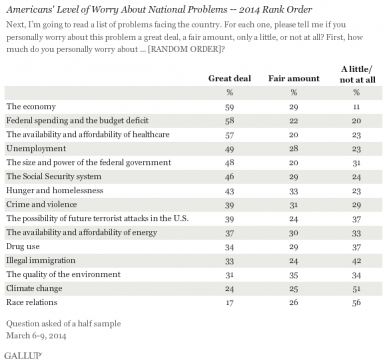 Copyright © 2014 Gallup, Inc. All rights reserved. The content is used with permission; however, Gallup retains all rights of republication. View larger image here.

Climate change may not immediately come to mind when people consider the economy, debt, and healthcare- but it should, and it is already hitting close to home.

The economy is at the top of Americans’ minds

What many people may not realize, however, is that extreme weather such as Hurricane Sandy, the 2012 Midwest drought, Typhoon Haiyan, and the current California drought are estimated to cost $65 billion, $35 billion, $14 billion, and $5 billion (so far), respectively. These are not insignificant economic impacts. The recent IPCC report projects that similar extreme weather events are likely to become more frequent and/or more intense, which will increasingly burden our economy.

Federal spending and debt are close behind

Climate change is inextricably linked to federal spending and debt, as government programs simply cannot handle the costs they have incurred from recent extreme weather events, events that are expected to increase in frequency and/or intensity. As a result of storms including Superstorm Sandy and Hurricane Katrina, the National Flood Insurance Program is estimated to be $24 billion in debt, and the federal budget to fight wildfires has had to borrow $1 billion from other programs in the last two years (including from wildfire prevention efforts) because of intensifying wildfires. Changes to the climate are contributing to debts that are now shouldered on the backs of taxpayers.

There is also no doubt that climate change is and will continue to hurt human health. As numerous medical associations have recognized, climate change may bring worsened air quality and asthma rates, increased transmission of infectious diseases from insects, and more heat related illness. These health impacts can affect our daily lives, productivity, and our pocketbooks.

The issues we care about are fundamentally interconnected. The economy and our health are already being affected by how we treat the planet, and the recent IPCC report shows that by taking action, including the ambitious Climate Action Plan, we can avoid the worst impacts on our climate and way of life.

The reason that Americans are not more worried about climate change is because there is no hard evidence to state emphatically what the results Of warmer temperatures will be… outside of coastal areas disappearing or being underwater for a part of the year.

It's not enough to say "maybe" or "this could happen" to frighten Americans out of their lethargy and into action. Unfortunately, we can only guess at the impact global warming will have and until that changes, Americans will say they're worried about climate change more so because they now that is what they should say rather than saying it because they actually believe it.