By Scott WeaverFollow
Scott is a Senior Climate Scientist in our Washington office.
Published September 1, 2016 in ClimateScience

Editor’s note: This post was updated on Sept. 8, 2016, with results from a NOAA study on the Baton Rouge flood.

A 1,000-year flood is supposed to be extremely rare. Its chance of occurring in a given year: 0.1 percent.

So how do we explain that in the span of just five months, the United States logged no fewer than four deadly 1,000-year floods in states as widespread as Texas, West Virginia, Maryland and Louisiana – following a 1,000-year-flood that ravaged South Carolina last October.

It appears that the calculation of a 1,000-year event may no longer be the most accurate statistic. It was based, as are our increasingly common 100-year natural disaster events, on data from the past. We may, in other words, already have shifted so far into a new climate regime that probabilities have been turned on their head.

Like any climate scientist will tell you, there is more to the story than what you see on the surface.

All climate and weather events are influenced to some degree by both natural climate variations and human-made climate change. The amount that each of these influences can exert on a particular event can theoretically range from 0 to 100 percent.

Rigorous scientific analysis has found that the extreme rainfall that caused a Texas flooding in May of 2015, for example, was caused by a fairly typical rainfall pattern associated with that year’s El Niño, a naturally occurring climate cycle, which had been supercharged by human-made climate change.

Working in tandem, these two phenomena together produced one of the largest multi-day flooding events Texas has ever experienced.

Attributing short-term extreme weather events to climate change is not a trivial exercise, even as the science of climate attribution has advanced rapidly over the last decade.

Using high-powered models and complex statistical analysis of observations, credible scientific statements can now be made about how climate change affect the frequency or intensity of a specific weather event.

There is an inevitable time delay between the occurrence of an event and the complete dissection of its various causes, but a rapid-response study by NOAA scientists has already concluded that climate change made the Baton Rouge flood 40 percent more likely to occur in 2016 than in 1900.

We have yet to see a report on the flash flood that devastated Ellicott City in July.

But it appears something is definitely up when 1,000-year floods continue to kill and wreak havoc.

We know that as the global average temperature rises, more water evaporates from the oceans. This, in turn, increases the amount of atmospheric moisture that is available for storms to process into rainfall. 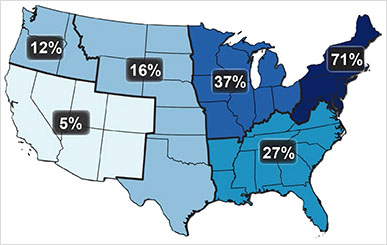 In fact, observations over the last 60 years indicate that over the United States, the amount of water falling in heavy rain events has increased substantially, and an astonishing 71 percent over portions of the mid-Atlantic and northeastern U.S.

In other words, if there were two storms with an identical structure over Boston, Massachusetts – one in 1955 and one in 2016 – the one in 2016 would, on average, produce 71 percent more rainfall.

Bottom line is that the heavy rainfall and disastrous flooding events that we continue to experience are certainly consistent with what the science tells us about the impacts from increasing global temperatures.

These floods are another reminder that we must change that trajectory.

3 reasons Zika may also be linked to climate change

When do we invest in Hydrogen?

A natural barrier to stop hurricanes in Florida, the Caribbean Sea
http://www.presapuente.com