As our climate warms, we’re experiencing stronger winds, higher storm surges and record rainfalls during hurricane season — which is also why these storms are becoming more destructive and costly.

So why do hurricanes bring more rain in a warmer climate?

Evaporation intensifies as temperatures rise, and so does the transfer of heat from the oceans to the air. As the storms travel across warm oceans, they pull in more water vapor and heat.

Storm surge happens when waters rise above their normal levels and are pushed inland by wind.

With Hurricane Katrina, it was the storm surge that caused the levees to fail, leading to destruction in the New Orleans area.

Storm surge was also responsible for an extra $2 billion in damage to New York City after Sandy hit in 2012, according to a Rand report.

This phenomenon is made worse by sea level rise, which is triggered by human-caused global warming as warmer ocean water expands and land ice melts.

The average global sea level has already risen by half a foot since 1900 — nearly four of those inches since 1970 — as countries have developed and populations have grown. Higher sea level can push more water inland during hurricane-related storm surges. 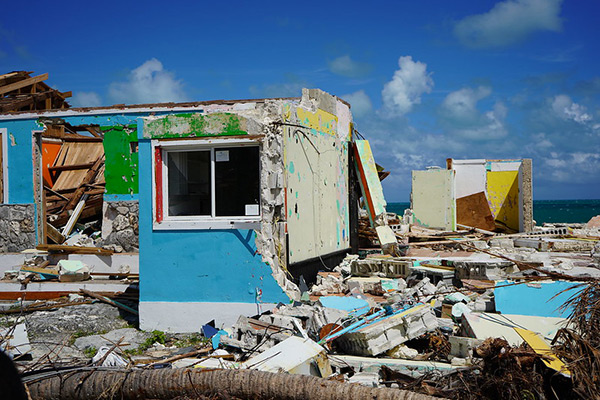 Stronger hurricanes are becoming more common in a warmer climate.

Researchers suggest that the most damaging U.S. hurricanes are three times more frequent than 100 years ago, and that the proportion of major hurricanes (Category 3 or above) in the Atlantic Ocean has doubled since 1980.

How fast hurricanes intensify has also increased in the Atlantic since the 1980s, due to climate change. Hurricanes Laura and Dorian are prime examples. Both rapidly intensified close to landfall, making it harder to predict the potential danger.

At the same time, hurricanes are moving more slowly, making more damage possible. Scientists are still debating exactly how this drop in speed is linked to climate change, but here’s the leading theory: The winds that steer hurricanes move more slowly in a warmer climate.

The damage we've seen from catastrophic hurricanes in recent years shows we need science more than ever to help us prepare for — and act on — climate change.

A rescue worker searches for stranded residents in a North Carolina town after a hurricane.
FEMA