California by 2080: Will the state be crippled by drought?

By Jeremy Proville
Jeremy is a senior manager, GIS & economics who focuses on climate change and ecosystems. He employs spatial mapping, modeling and other analytical skills to further EDF’s research efforts.
Published September 1, 2015 in ClimateEcosystems

California is now well into its fourth consecutive year of drought, and we already know that climate change has likely played a pivotal role in exacerbating the situation.

This is not without consequences. Tensions in the state have mounted as urban and agricultural water users become increasingly stressed by water shortages. One thing that all Californians can agree upon is that we need to find some solutions, because this situation is not tenable in the long run.

By 2080, climate models agree that California stands to experience a decrease in average rainfall accompanied with an increase in average temperatures. I will illustrate with three graphics below how the state will be affected by these climate impacts.

To do so, I used multi-model averages from 16 recent Intergovernmental Panel on Climate Change projections, assuming a future scenario which, albeit pessimistic, is plausible if we do not make a more concerted effort to reduce global greenhouse gas emissions. I analyzed impacts on three major land types: urban areas, croplands and rangelands.

The map below will give you a better sense of where these land areas are located in the state. 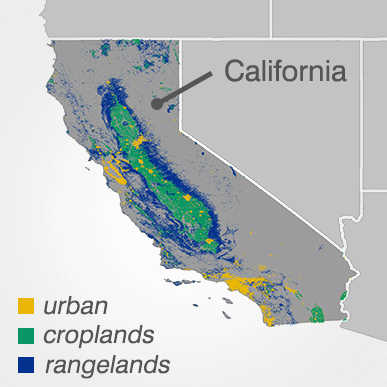 Don’t be deterred by the graphs below; they are actually a lot simpler than they look. They illustrate how these lands stand to be affected by climate change by 2080. There are three pieces of information to note here:

We begin with lands that are essential to our food security, but that also require the most water: croplands.

Most of California’s croplands are located in the farm-rich Central Valley, and the graph below shows that most of this important land will likely be exposed to increasingly severe climate impacts over the next six decades.

By 2080, expect a temperature rise of about 7° Fahrenheit, coupled with a drop in rainfall by as much as 14 percent. This will make it much more difficult to maintain food production and environmental integrity in a region that now produces nearly half of all vegetables, fruits and nuts consumed in the United States. 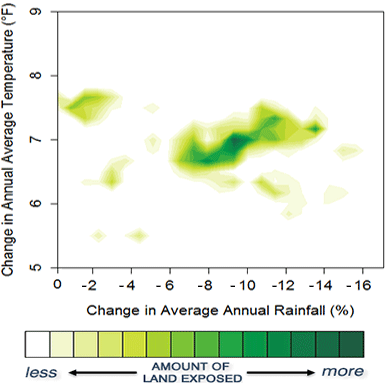 Rangelands: A variety of outcomes

Cattle farming and dairy production is California’s largest agricultural output. Ranches and healthy pastures for grazing are essential to these operations.

This graph suggests that rangelands will experience a wider range of impacts than croplands face. This stands to reason, as these grasslands are more widely distributed across the state, covering a large area and a diverse array of ecosystems. 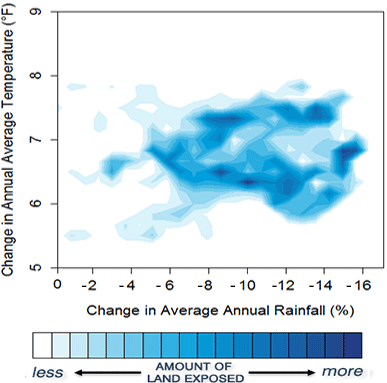 Finally, we turn to California’s urban areas. As significant water users, settlements throughout the state could be affected even more severely than croplands, with larger cities such as Los Angeles and San Diego located in regions where average annual rainfall may drop by as much as 14 percent by 2080. In those two cities alone, that decrease is about as much water as 800,000 Americans use in a year. 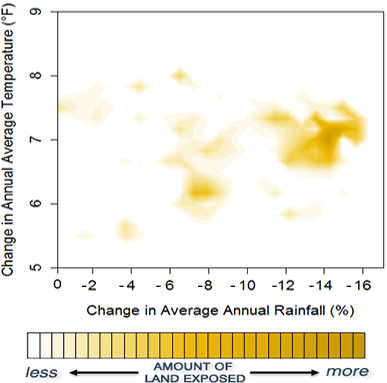 What does all this mean?

If there’s one takeaway from the analysis above, it’s that these regions will have to endure more droughts and hardship in the longer term unless we get our act together.

More than any state, California is leading the way when it comes to tackling climate change – but a global, concerted effort is needed to create a better future for Americans and everyone else. The Environmental Protection Agency recently finalized the Clean Power Plan, which means the United States is taking steps in the right direction.

Besides cutting emissions, we also need to be smart about how we use water.