How can we grow more rice - with less land, water and pollution?

By Kritee KriteeFollow
Kritee is a senior scientist with EDF's International Climate team and works at our office in Boulder, CO.
Published July 31, 2013 in EconomicsPartnerships

Rice provides more calories to humans than any other food, and more than 1 billion people depend on rice cultivation for their livelihoods.

To keep this critical staple affordable for the world’s rapidly growing population we must boost rice production - at a time when climate change is projected to decrease yields.

It means the world must learn to produce more rice – and to do it with less land, less water and less labor. It’s the very challenge Environmental Defense Fund and its partners have taken on in India, a country where roughly 500 million of the world’s 2.3 billion people in small-scale farming families live, earning between $2 and $4 a day.

How to grow more food with less pollution

Equally concerning are nitrous oxide emissions from rice that can be as, or more, significant than methane, especially when rice paddies are not permanently flooded. Nitrous oxide has about 300 times more warming potential than carbon dioxide.

Partnering with NGOs in India

Rice farmers in South India are now working with non-governmental organizations in a broad coalition, the Fair Climate Network, to address such challenges. EDF scientists teamed up with these partners to develop an environmentally sustainable and economically profitable way to farm rice that will increase climate resilience and decrease greenhouse gas emissions.

Our partners are already working with thousands of rice farmers to record all the farm level data necessary to understand the economic and environmental impacts of their work.

We have also developed protocols to quantify what’s happening on the ground - including yields, production costs, and emissions of nitrous oxide and methane from the rice fields.

Today, field laboratories in rural South India constantly monitor emissions. Our preliminary research shows that there is potential to reduce carbon emissions by up to 5 metric tons per acre per year - equivalent to taking an average American car off the road for a year. 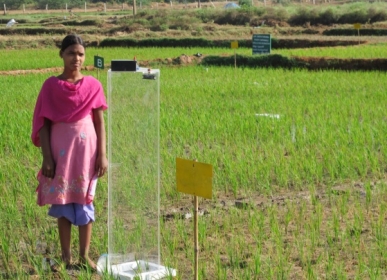 A farmer’s daughter in Andhra Pradesh, India, was trained to collect GHG samples from flux chambers.

Eventually, we expect to have enough data to make a case for low-carbon farming of rice throughout the region. If successful, we could decrease emissions by up to 100 million tons of CO2e per year - while at the same time saving water, improving farm incomes and protecting rice yields.

This reduction is roughly equal to taking 10 million American cars off the road or taking 10 to 20 coal power plants off the grid. To make this possible, however, we will have to raise resources for outreach and to cover the transactions costs of monitoring and verifying the emission reductions.

Such investments pay off. The potential for this kind of research to support development, food and political security, while mitigating climate change is enormous.

It’s something to think about the next time you have a bowl of rice.

Monsanto is the problem and im supprised they were not mentioned in either article.the gmo crops are ruining the health of the people and the soil in which they are grown in.tehy use far to much pesticides on a Monsanto crop.and technology or funding for increasing nutrition in crops and actual crop yields without harm to human bodies would be far more available if Monsanto didn't control the market with untold falsehoods they gave farmers that have not materialized greater yields as told to the farmers by Monsanto.Monsanto seeds are basically garbage efforts at a real problem and they control the seed market for most crops in the united states. and once a farmer uses Monsanto seed the soil in that filed is harmed so greatly by over use of pesticides that only Monsanto seeds genetically modified mutated and now bad for human consumption can be grown in that field.not to mention the bees are dying in large amounts due to the use of to much pesticides.green peace usa has a campainge to support bee population. they are on the web.the article about rice was new info thanks...have a nice day.

How can we stop excessive growth of paddy crop?