EDF estimated total annual methane emissions from all oil and gas wells in Pennsylvania based on emission measurements taken by researchers in the Marcellus Shale and insights gained by the Methane Research Series, a six-year, 16-study effort to understand where and how much methane is lost across the natural gas supply chain.

EDF estimated production site emissions by source category using a combination of data sources, including the EPA Greenhouse Gas Reporting Program (GHGRP). For associated gas venting and flaring, other flares, compressors, dehydrators, liquids unloading, pneumatic pumps, and combustion exhaust, emissions were estimated by adjusting GHGRP reported emissions from basins 160 and 160A based on well activity data. This adjustment accounts for both reported basin emissions outside Pennsylvania and non-reported emissions within the state. We estimated emission from pneumatic controllers based on adjusted GHGRP controller counts and emission factors from Allen et al. 2014. Equipment leak emissions are based on site counts using the approach of Zavala-Araiza et al. 2017. We estimate oil and condensate tank flashing from oil production volumes with emission factors from the EPA O&G Emission Estimation Tool, and an assumption of 95% destruction efficiency. We estimated produced water-tank flashing emissions from state-level water production and the EPA O&G Emission Estimation Tool emission factors.

The difference between site-level and aggregate source-level emissions was attributed to "abnormal process conditions" (see Zavala-Araiza et al. 2017). This includes malfunctions and other issues that lead to high emission rates that are not accounted for by traditional source-level inventory methods.

These estimates were aggregated and converted to US tons in order to be comparable with the State of Pennsylvania’s methane inventory. In order to present the most conservative estimates possible, EDF choose to use the low end of these ranges in the various visualizations and tools in this report.

EDF estimated the total annual emissions of volatile organic compounds (VOCs) based on this estimated total methane inventory. In order to account for variations in gas composition across the state, EDF converted methane to VOCs for each county using the ratio of methane to VOCs reported by the operators in each county [XLSX] and then aggregated these county-level estimates into a statewide total: 54,100 tons. Additionally, we applied the standard methane to VOC conversion factor (9.7) used by Pennsylvania Department of Environmental Protection (DEP) to the estimated methane inventory to offer an additional point of comparison: 53,900 tons.

Using each baseline (DEP reported inventory and the EDF estimated inventory), we projected emissions forward under a Business as Usual (BAU) scenario, using the Reference Case production projections – for oil and for gas - in the U.S. Energy Information Administration’s Annual Energy Outlook 2017 (AEO), the best available representation of future changes in BAU methane emissions. In addition, we converted the oil and gas production figures to MMBtu so that we could also assess the total O&G energy growth year to year.

We then assigned a growth profile (Oil, Gas, or Oil & Gas) for each source category based on the most representative resource projection. For example, fugitive leak emissions were tied to total oil & gas projections, while compressors were tied to the natural gas projections. Using this method, we were able to project forward the estimated emissions for each source category under a BAU scenario. Additionally, we assessed the allocation of emissions (by year and source category) between new sources and existing sources in order to model those reductions which only apply to new wells.

Additionally, we used DrillingInfo to establish a turnover rate of existing to new wells year- to- year by examining recent well turnover rates in Pennsylvania. Turnover rates used are 1.5% for conventional wells and 3.9% for unconventional wells. This allowed us to assess the allocation of emissions (by year and source category) between new sources and existing sources in order to model those reductions for new wells. 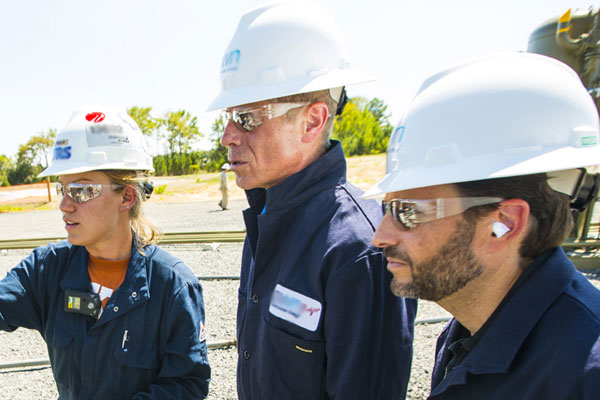