By Dan Upham
Dan is a writer and editor at EDF.
Published July 9, 2015 in Climate

The original version of this post was published on the EDF Talks Global Climate blog.

This summer, 222 million American passengers are expected take to the skies – a record high, to say nothing of how many packets of peanuts that represents.

While business and leisure pursuits often necessitate air travel, those trips aren’t friendly to the skies. A proposed “endangerment finding” by the Environmental Protection Agency this month noted that carbon pollution from airplanes creates risks to public health and welfare.

What’s more, aircraft emissions, the largest unregulated source of carbon pollution in the transportation sector, stand to  jeopardize the health of the entire aviation industry.

In fact, airports and airlines are contributing to, and suffering from, a number of climate change impacts that could make oversold flights and checked baggage fees seem like a walk in the park:

Heat or flooding can make airports inoperable. When temperatures soar toward 100 degrees Fahrenheit, tarmacs have been known to get soft and cause the wheels of planes to get stuck.

Making things worse, many airports are also located in flat, coastal areas or in vulnerable floodplains where extreme storms can inundate runways, as in the photo below. 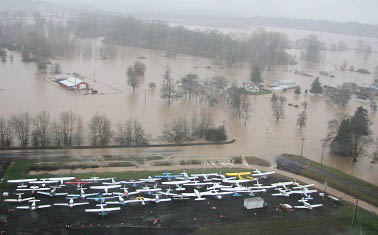 High temperatures on the tarmac can lead to heat stress and other disorders associated with extreme working conditions. Concrete and asphalt turn into “heat islands” during hot weather, making airport employees especially vulnerable. 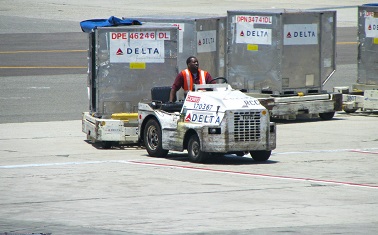 In 2014, the brutal winter in parts of the United States led to the highest number of flight cancellations in a quarter century. Tens of thousands of travellers were stranded.

Expect more bad winter weather and inconvenience for passengers in the years ahead: Scientists say climate change will likely bring more and increasingly intensive storms to northern United States, among other regions. 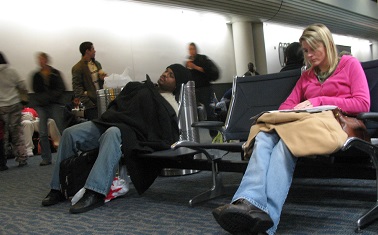 Not even large airport terminals can withstand extreme storms. The Lambert Airport in St. Louis was damaged twice by tornados in just two years. 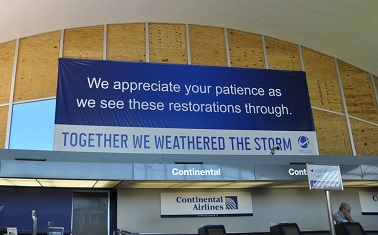 Indeed, you don’t have to look far for evidence of this climate-related aviation chaos in action.

These are expensive impacts borne not only by the airlines, but by the cities that own the airports, associated businesses and the public at large.

The airline industry has a vested interest in the fight against climate change. It’s in airlines’ own best interest - and in the best interest of the public they serve - to support tough limits on carbon pollution.

That puts the spotlight on the International Civil Aviation Organization, the Montreal-based agency that sets standards for the industry worldwide. It has pledged to finalize, by September 2016, a global market-based measure to cap and cut carbon pollution from international plane travel.

It’s time to get that solution ready for takeoff.