How we can protect wildlife, while meeting our energy needs

A common misperception is that responsible energy development cannot coexist with vibrant wildlife. And it’s counterintuitive for some to contemplate that a bird population could get healthier after an oil well is drilled or a wind turbine is built.

But that’s precisely what we aim to accomplish with the Lesser Prairie-Chicken Habitat Exchange, which is now under review by the U.S. Fish and Wildlife Service.

Like many species across the American West, the lesser prairie-chicken requires vast habitat to survive, but it competes for territory within a landscape that supports energy production and agriculture. So while demand for food and energy rises, we need to find solutions that benefit both the economy and the environment.

That’s why EDF scientists, economists and policy experts worked for more than a year with diverse stakeholders representing the interests of agricultural producers, universities and oil and gas companies in five states to come up with a viable solution. 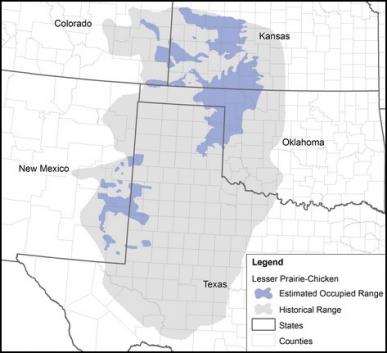 In a habitat exchange, farmers and ranchers who protect wildlife habitat earn revenue by selling habitat credits to oil and gas companies and other energy producers seeking to mitigate unavoidable impacts of their operations.

It really is that simple. Additionally, the benefits of the unique aspects of habitat exchanges are huge. Exchanges utilize rigorous science to measure the actual quality of conservation being done, not just acres or practices. This ensures the exchange leaves wildlife and habitat better off. And in an era of tight budgets, habitat exchanges operate with no cost to the taxpayer. Government does not set the price for habitat credits sold on the exchange – buyers and sellers do.

By far the best feature of a habitat exchange is its collaborative nature.

In order to use the vast potential of privately owned lands to protect habitat in a way that strikes the right balance between species protection and economic growth, all stakeholders – including farmers, ranchers, energy producers and conservationists - come together to generate positive environmental outcomes.

We are well on our way to delivering on the promise of exchanges. As I mentioned, the Fish and Wildlife Service is reviewing a suite of scientific and legal documents that, if adopted, will enable the Lesser Prairie-Chicken Habitat Exchange to operate. The package includes two pieces that were developed collaboratively by all interests in the stakeholders group:

A third document, the proposed habitat conservation plan [PDF], was developed by agriculture and oil and gas stakeholders.

In essence, exchanges simply bring buyers and sellers together to conserve and improve wildlife habitat. Exchanges can prove that diverse, plentiful wildlife and a robust economy can not only co-exist, but can interact in a way that creates more habitat and more jobs.

In this scenario, everyone wins, including the lesser prairie-chicken.

According to your article, habitat exchanges are a right balance between the protection of species, resulting in an increase of habitats and job creation. I read your article more in depth and was enlightened to how the development of energy and wildlife can co-exist leading to more jobs.

Thank you for sharing.