Monkfish, aka American goosefish, eats way better than it looks.

When it comes to seafood, we  are creatures of narrow habit. The average American eats about 15 pounds of seafood each year  (well below the global average for coastal nations), almost 60% of which is either shrimp, canned tuna or salmon. That number jumps to more than 80% if you include “whitefish” like pollock, tilapia and cod.

So when one of these few items becomes overfished, too expensive or less available, the market usually just tries to pass off some other species in its place. 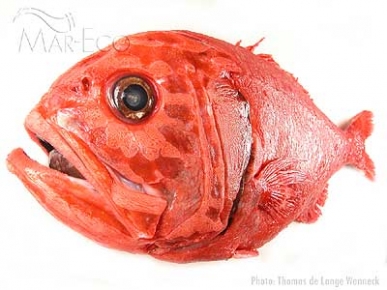 For example, 20 years ago, no one knew what a slimehead or American goosefish was. But when Atlantic cod fisheries crashed, low-value orange roughy and monkfish slowly gained in popularity and are now staples on restaurant menus – even though most people have no idea what the actual fish look like. What started out as worthless bycatch (also known as trash fish) that usually got dumped overboard will now routinely run you $10/lb or more in the market.

Unfortunately, Atlantic cod populations off New England are actually faring even worse today. We recently learned that fishing quotas for 2013 will be slashed by almost 80% in certain areas compared to last year. There are several factors at play, among them decades of intense fishing pressure, ecosystem shifts and climate change. Nevertheless, we should still support New England fishermen by purchasing what little local cod makes it to market in 2013.

But how can we ensure that this iconic fishery – and others like it on the Pacific coast – don’t disappear quietly in the night? Our experience with orange roughy and monkfish provides one important answer: Previously unfamiliar fish can win the hearts of seafood lovers and help strengthen local fisheries.

It turns out that cod fishermen can also target several other related species, but traditionally haven’t done so because they don’t yet command a good price. Trash fish (or as I like to call them, under-appreciated species) like Atlantic hake, pollock and Acadian redfish may be the key to this fishery’s survival.

Luckily, catches of pollock, hake and redfish actually outnumbered those of cod and haddock in 2011. Population levels for these fish remain strong and a new management system promises to ensure that overfishing doesn’t occur – even with increased consumer demand.

Simply catching more won’t solve the problem though, since pollock hake and redfish fetch between $0.50 and $0.90 per pound at the dock – less than half that of cod and haddock. So we need to educate a largely uninformed public about the environmental and health benefits of these species, which will in turn convince supermarkets, restaurants, and foodservice companies to incorporate them into their menus and inventories.

With a little luck, this will get the market to say, “I’ll have the trash fish, please.” And perhaps more importantly, the modest price increase that results will ensure that the New England groundfishery survives to fish another day.

As my colleague Barton Seaver, Director of the Healthy and Sustainable Food Program at Harvard’s School of Public Health, likes to say, “The key to sustainability is flexibility.” I couldn’t agree more. And while it’s never easy to change popular tastes, we don’t need to make a major shift to produce a direct, positive impact on the viability of coastal fishing communities. We just need to expand our comfort zone a little.

So the next time you’re dining out or buying fish at the market, do me a favor: Instead of farmed salmon or imported shrimp, give the Acadian redfish (aka ocean perch), chilipepper rockfish or Pacific sardine a try.

I can think of dozens of American fishermen who would thank you for it.