It's the demographics, stupid: Why the political future looks good for environmentalism

By Keith GabyFollow
Keith is an Associate Vice President of communications at EDF.
Published April 24, 2013 in ClimatePolitics 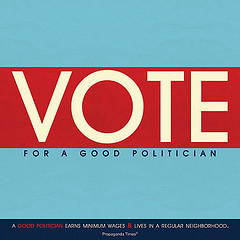 Political strategists not only want to know what The People think today, but where they are headed.  In the short term, that might mean understanding that an issue that’s popular right now – perhaps because of something in the news – might become unpopular by Election Day.  In the longer term, strategists need to understand demographic and political trends so that their party doesn’t get left behind.

The question of immigration reform is a good example. Both parties see that Latinos are a fast growing segment of the population. So it is obviously very important, in order to win future elections, to be attractive to these voters. That has led to the bi-partisan, self-interested push to achieve immigration reform, which is a high priority for many Hispanic-Americans.

What is true of ethnic population growth is also true when it comes to the inexorable aging of every individual voter. If people born before World War II mostly hold one view and people born after 1980 mostly hold the opposite view, a smart political strategist will align his party with the latter position. Why? Because the younger people will be voting for many more decades than their grandparents. This phenomenon is an important element in the fast changing politics of gay marriage.  As this Washington Post analysis shows, young people are far more supportive of gay marriage, so it’s a long-term political problem (nationally) for those who are opposed.

Politicians are beginning to understand that the same variables come into play with climate change. According to polling by the PEW Center, more than 70% of Americans already believe the climate is changing. But on the more contentious question of whether greenhouse gas pollution is causing that change, there is a dramatic generational divide. Only 28% of voters over 65 accept the scientific consensus that these emissions are warming the Earth, but close to 50% of those under 50 accept it. That means that support for policies to limit greenhouse pollution will only grow in the years ahead. (And there is no reason to believe that young voters will change their minds about this scientific question as they get older.) 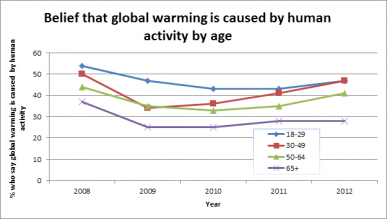 Based on data from the PEW Research Center

Some strategists will argue that despite the growing support for climate action, not enough people consider it a “voting issue” – something citizens use to determine which candidate to support.  Still, a candidate’s view on this issue, as for gay marriage, can be a signal to voters about their broader political profile. For example, while gay marriage doesn’t have a direct impact on a majority of voters, younger people may see opposition to it as a signal that a candidate is intolerant. Similarly, voters born after 1985 — who have never experienced a colder than average month — may regard a politician who denies  the scientific evidence of climate change as out of touch.

This doesn’t mean supporters of climate action can relax because a demographic wave is coming to save us. Population changes come slowly and the scientific evidence suggests global warming is advancing rapidly. If we wait on population trends to save us, things will get a lot worse and more expensive to fix before they get better. So we need to continue to push for action, and hope the pundits and strategists see which way the political winds are blowing.