It was the mid-1970s and Robert W. Wilson had a problem on his hands: Gypsy moths had attacked his trees and he didn't know how to get rid of them.

Uncertain where to turn, Wilson called Environmental Defense Fund (EDF), then a small, newly-formed environmental group based in Long Island. EDF trustee and co-founder Art Cooley showed Wilson how to deal with the problem without resorting to pesticides. It marked the start of a fruitful relationship that spanned decades, including Wilson's 25 years of dedicated service as an EDF trustee.

A lifelong conservationist with a deep appreciation of the natural world, Wilson was impressed with EDF's market-based solutions to environmental challenges. He was an early supporter of EDF's 1990 cap-and-trade program to reduce acid rain, which cut U.S. sulfur dioxide emissions in half – faster and at less cost than predicted. He was also an early champion of EDF's science-based "catch shares" program, which has transformed many fisheries, creating healthier oceans that support more fish, feed more people and improve livelihoods. And his support for creative approaches to endangered species protection, aimed at avoiding costly years of litigation, ultimately led to millions of acres of habitat protection. 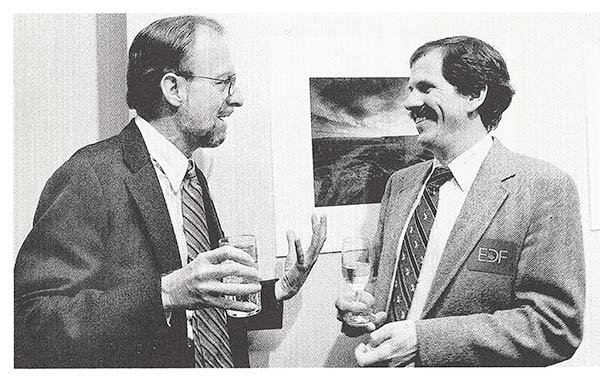 As a trustee, Wilson offered pragmatic guidance, drawing on his experience as a legendary investor and philanthropist. He generously supported EDF as well as The Nature Conservancy, the Wildlife Conservation Society and other organizations. And he inspired many others to be generous as well, making a $100 million challenge grant to match new and increased contributions to EDF, which strengthened the organization in a lasting way.

Wilson passed away in 2013 at the age of 87, but his legacy lives on at EDF, thanks to his enduring friendship and support. "The Wilson Legacy" feature in EDF's quarterly Solutions newsletter honors his memory by highlighting the approach that Wilson championed: economically sound and efficient solutions for the most pressing environmental problems.

Bob’s support was pivotal in taking EDF to a new level of success and international reach.