Bustling ports can fuel local economies. They also can be the single largest source of air pollution in surrounding communities because of the diesel-powered vehicles and equipment moving cargo through them.

Cities, however, do not have to choose between this economic juggernaut and clean air.

Environmental Defense Fund is working in Houston, Oakland and Baltimore on ways to reduce airborne particles and gases that worsen smog and harm human health while keeping goods moving. That starts with understanding the pollution sources.

Houston has one of the nation’s busiest ports. More than 210,000 container ships and tankers moved through the Houston Ship Channel in 2017 alone.

New technology for tracking these giant vessels is enabling EDF to gain insights into how commercial shipping contributes to Houston’s dirty air. For example, the information generated by the use of Automatic Information Systems can help us to determine whether there is an increased risk of hospitalizations because of cardiovascular and respiratory problems triggered by marine traffic. 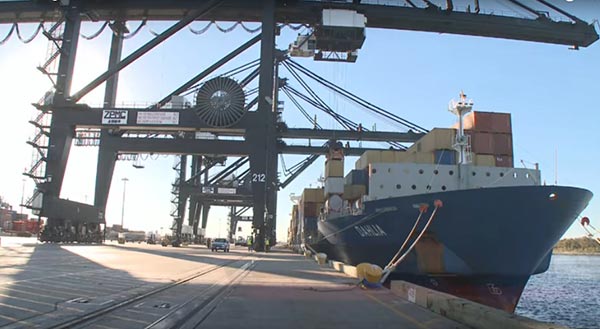 Video: More about the origins of the Drayage Loan Program

We also are using computer models to estimate the economic and health benefits at the neighborhood level from reducing air pollution. Ultimately, our experts can use this information to identify targeted solutions that reduce health risks for those living near the Ship Channel.

We already know that many tugboats and other vessels use diesel engines far beyond their projected lifespan of 23 years. Some engines are in operation for 50 years, according to a study by EDF and the Diesel Technology Forum.

EDF estimates that the prolonged use of diesel engines at Port Houston produces an additional 4.1 tons of smog-forming pollution each year. That matters because Houston does not meet federal health-based standards for ground-level ozone, or smog.

Our partners include Port Houston and the Houston-Galveston Area Council. Together, we have deployed zero-emissions technology at distribution centers and created an innovative program that helps truck owners to buy new, cleaner vehicles.

The story of the Port of Oakland’s air pollution is one of two freeways.

Trucks can use Interstate 880 to move products from the port to markets across California and the U.S. State and federal rules ban them from using nearby Interstate 580.

What that means for communities along the freeways in significant. EDF and our partners recently found that concentrations of black carbon are 80 percent higher along I-880 than I-580. Testing for black carbon is a common way to determine levels of diesel exhaust, which is linked to higher risks of cancer, heart disease and lung disease.

Data suggest that life expectancy for people living along I-880 is seven years shorter than for those living along truck-free I-580. This underscores the critical need to eliminate diesel emissions.

EDF is working with the Maryland Ports Administration to reduce emissions and protect human health from diesel engine emissions at the Port of Baltimore.

In addition, we are working with stakeholders in Baltimore to share the opportunity that repowering or replacing tugs could represent for improving local air quality. An added co-benefit of cleaning up marine engines is that reducing emissions from nitrogen oxides (NOx) to the air also helps reduce nitrogen additions to the Chesapeake Bay, which helps reduce algal blooms and other harmful effects.