New report: How climate change is impacting where you live

By Ilissa OckoFollow
Ilissa is an EDF Climate Scientist.
Published May 6, 2014 in ClimateScience

The National Climate Assessment (NCA) report, prepared by the U.S. Global Change Research Program, is essentially the U.S. equivalent of the Intergovernmental Panel on Climate Change (IPCC): Using the best available science, over 300 experts synthesized current understanding of observed and future climate changes and impacts, particularly in the U.S. The third ever NCA was released today, and concludes beyond a reasonable scientific doubt that Americans are being affected by climate change.

These changing conditions produce a variety of tangible stresses on society by affecting human health, water resources, agriculture, energy, infrastructure, and natural ecosystems. The particular impacts vary by region, but no corner of the country is immune to the change.

So what’s happening where you live? 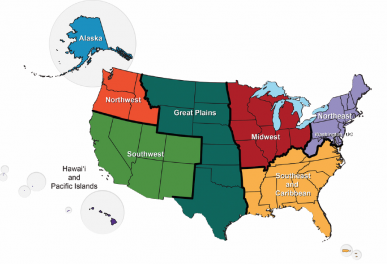 Unless we take immediate action to curb our emissions of heat-trapping gases, the foreseeable future will be plagued by further warming and worsening impacts. The good news is that because we know what the cause is, we also know what is needed in order to stabilize our planet. We must come together now—locally, nationally, and internationally—and work towards a better future.

You can make changes in your own life, but what drives the biggest change is joining a groundswell of people to influence policy and industry leaders. We’ll send you urgent news updates and tell you when your voice is needed.

END factory farming, the biggest contributor to green house gasses by far. More than all the others put together. But NOBODY wants to talk about it. We can't move on without ENDING FACTORY FARMING.

Climate change is fueled by carbon emissions. To get emissions lower we need to think about a fee charged on emissions at the source and then that fee given back to the American people distributed like Social Security. This would be a huge incentive to produce more clean renewable energy. Nasa scientist, Jim Hansen, serves on the board of a group called Citizen's Climate Lobby which is advocating such a policy.