EDF Goes Back to Court to Support Climate Pollution Reductions

By Peter Zalzal
As a staff attorney for our Domestic Climate and Air legal team, Peter works to secure clean air and support climate change mitigation through policy initiatives and strategic litigation.
Published May 8, 2013 in Legal 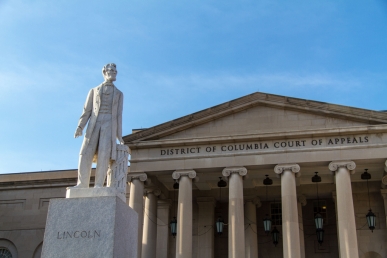 Another high-profile clean air case played out yesterday in the U.S. Court of Appeals for the District of Columbia Circuit.

A three-judge panel heard oral arguments in a lawsuit filed by the state of Texas and some industry petitioners.

EDF was part of a coalition of clean air advocates that filed two briefs in the case. We filed in support of EPA, along with Conservation Law Foundation, Natural Resources Defense Council, and Sierra Club.

At issue in the case are State Implementation Plans, or SIPs as they’re commonly known.

Here’s some background on the case

In 2010, EPA found that 13 states, including Texas, lacked the ability to carry out that requirement.

All those states except Texas worked with EPA to ensure permitting authority was in place. That allowed large new industrial sources in those states to obtain the needed construction permits.

“ha[d] neither the authority nor the intention of interpreting, ignoring, or amending its laws in order to compel the permitting of greenhouse gas emissions.”

That brings us to the lawsuits.

Here’s a look at what happened in court yesterday

The judges closely questioned Texas and industry petitioners about the impact of the court’s recent decision in another case that we’ve written about.

In that challenge to the Endangerment Finding, before the same court, judges upheld EPA’s first-generation climate protections.  The decision in that case said that EPA’s interpretation of the Clean Air Act was:

In light of that earlier ruling, EPA argued that its actions were necessary to ensure that sources in Texas could get permits.

That became one of the main points of discussion during oral arguments yesterday – as the judges pressed Texas and the industry petitioners to describe how EPA’s actions caused them any injury.

What’s at stake in the case

This case is part of an extensive suite of litigation Texas has mounted to oppose some of America’s most important climate protections.

If successful in this case, the upshot of Texas’s actions would be to eliminate any authorityfrom which new industrial sources in the state of Texas could obtain permits addressing their greenhouse gas emissions – permits which these sources need for lawful construction.

Texas is suing even though EPA has taken great pains to create a reasonable and fair process:

Unfortunately, as Texas continues to devote scarce public resources to suing over the common-sense climate protections of U.S. clean air laws, communities in Texas are already suffering from the weird weather linked to climate change – like last year’s debilitating drought.

And in an ironic twist, at the same time that Texas is using public resources to fight common-sense climate pollution standards, Texas leads the nation in wind power — a zero-emitting resource.

In 2012, wind power led the entire nation in the overall deployment of new electricity generating resources, with 13,124 megawatts.  Much of that came from the Heartland — Texas, Iowa, Oklahoma, Kansas and Colorado.

That means Texas is looking at a … well … Texas-sized economic opportunity – as well as an opportunity for climate progress.

What a shame they’re choosing to waste their time and money in court instead.