By Lisa Moore
Lisa, an EDF scientist, works to ensure that our ongoing work is based on the best available science. She also leads an effort to identify and explore emerging issues that may be relevant to our mission.
Published March 16, 2013 in Science

Einstein would be delighted

Like most scientists, I spend some time each week checking out various academic journals for interesting research articles. I always find studies that are relevant to EDF’s work, but “relevant” doesn’t necessarily mean “wow!”

I am, however, guaranteed a dose of “wow” every February, when Science magazine publishes the winners of the International Science & Engineering Visualization Challenge. The contest recognizes the best photographs, illustrations, graphics, games and videos that bring science to life. Below are some of my favorites from the 2012 competition.

The video “Observing the Coral Symbiome Using Laser Scanning Confocal Microscopy” reveals details and colors that no diver or snorkeler has ever seen, even in the healthiest coral reef. Best part: The colors are natural. They come from fluorescent molecules in the coral polyps and their symbiotic algae.

I love this video not only because it shows corals in a whole new light, but because it really lets you see that corals themselves are complex ecosystems. The video ends with an image of bleached coral, which is just as shocking at this scale as it is when you see before and after pictures of a whole reef decimated by warming water. It’s a powerful reminder of the threat of climate change.

I’m a biogeochemist with a degree in evolutionary biology, so the poster on “Earth Evolution: The Intersection of Geology and Biology” is a natural winner for me. It shows how rocks and life have interacted across 3.8 billion years of Earth’s history. As one of the poster’s designers put it, in what may be the understatement of the year, “A lot of things happened.” 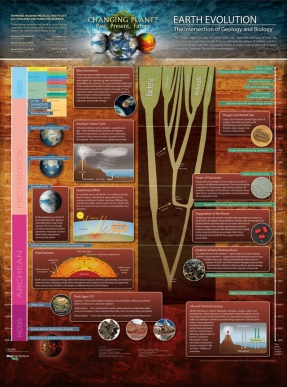 Click the lower right of the image to see it larger

Here are two other favorites I’d like to highlight, just for fun. Cool thing #1: Physicists have developed a video game that helps players develop intuition about special relativity – by guiding a caped dinosaur “through a world that morphs according to her velocity.” If the topic isn’t interesting to you or the scenario and animation don’t make you smile, then surely the name will get a chuckle: “Velocity Raptor”.

Cool thing #2: The video “Revealing Invisible Changes In The World” shows how magnifying tiny changes in color and motion in ordinary video can allow you to see things like a person’s heart beat just by looking at his or her face. The researchers point to some obvious medical benefits of this technology, but it’s fun to come up with your own potential applications.

The Visualization Challenge is now ten years old, and all the winners are available online. I hope you’ll check them out, because, as the National Science Foundation says, “science and engineering’s most powerful statements are not made from words alone”. Which ones are your favorites?

This design is wicked! You certainly know how to keep a reader amused. Between your wit and your videos, I was almost moved to start my own blog (well, almost...HaHa!) Excellent job. I really enjoyed what you had to say, and more than that, how you presented it. Too cool!