What fishing in Myanmar means for the world

When I tell people I recently spent two weeks in Myanmar exploring how to expand our oceans work to this isolated Asian nation, I am most often greeted by puzzled looks. Clearly, few Americans know much about the myth-shrouded land known more familiarly as Burma.

People of all stripes, however, have heard of Nobel Peace Prize winner and social activist, Aung San Suu Kyi, who struggled for many years against a repressive military government, and who is now working within the political system to test the boundaries of the developing “Burma Spring.”

The emergence of democracy and progressive political thought in Myanmar is especially important to Environmental Defense Fund’s oceans work: The Republic of the Union of Myanmar is the world’s 10th largest fishing power and one of the fastest growing.

Myanmar’s fisheries in danger of collapse

Its reemergence as an economic force means that getting fishing right in Myanmar is critical both to the future of that part of the Indian Ocean, but also as a building block in Southeast Asia for sustainable fishing. 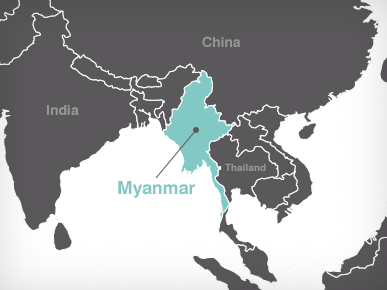 Just beginning its economic emergence, Myanmar remains desperately poor, and relies upon fishing - in both marine and freshwater - and aquaculture as an essential food source and economic engine. Yet, the productivity of the fisheries is low and in danger of total collapse, as fishermen of all types scramble to catch everything that moves, from tiny baby fish to adults.

That desperation threatens not just the well-being of more than 53 million people who depend on fish for 43 percent of their animal protein, but also the health of the incredible coral reef and mangrove ecosystems of the Bay of Bengal and the Andaman Sea.

I traveled with a team of experts from the Charlottesville-based foundation “blue moon fund,” which has been funding sustainable forestry work for many years in northern and central Myanmar. My job was to help scope fisheries and other marine conservation opportunities.

With help from the fund’s connections with the government, we spent four days taking a detailed look at the most important fishing region in the Myeik Archipelago.

We worked directly with established non-governmental organizations – including the Wildlife Conservation Society and Flora and Fauna International, which both have excellent work underway – and high-ranking scientists, managers and fishing industry representatives to explore partnerships we would need to be effective in such an unfamiliar cultural context.

Overfishing: How bad is it?

We were escorted by U Hla Win, Myanmar’s retired deputy director general of fisheries, and Dr. Swe Thwin, a retired professor. The two are also important consultants for the Myanmar Fisheries Federation, the powerful umbrella association of all of Myanmar’s fisheries.

We spent considerable time understanding the fisheries operations of Pyi Phyo Tun International, Aung Myat Phyo International and the Myeik Public Corporation, who together manage most seafood processing and exports from the region. We also toured their very extensive aquaculture operations, including a two-million unit crab shedding facility that produces soft-shell crabs for broader Asian markets.

A door has been opened

We were welcomed with open arms and great warmth by the Myanmar people – from simple fishermen to chief executives. Most Myanmar people today understand that their world is changing, and that a shining future can be built through enduring partnerships with people and organizations that care about their country and the broader world we share.

We still have work to do to establish the shared strategies and partnerships we need to succeed, and to find the resources required, but in Southeast Asia, I know, a new door has opened.