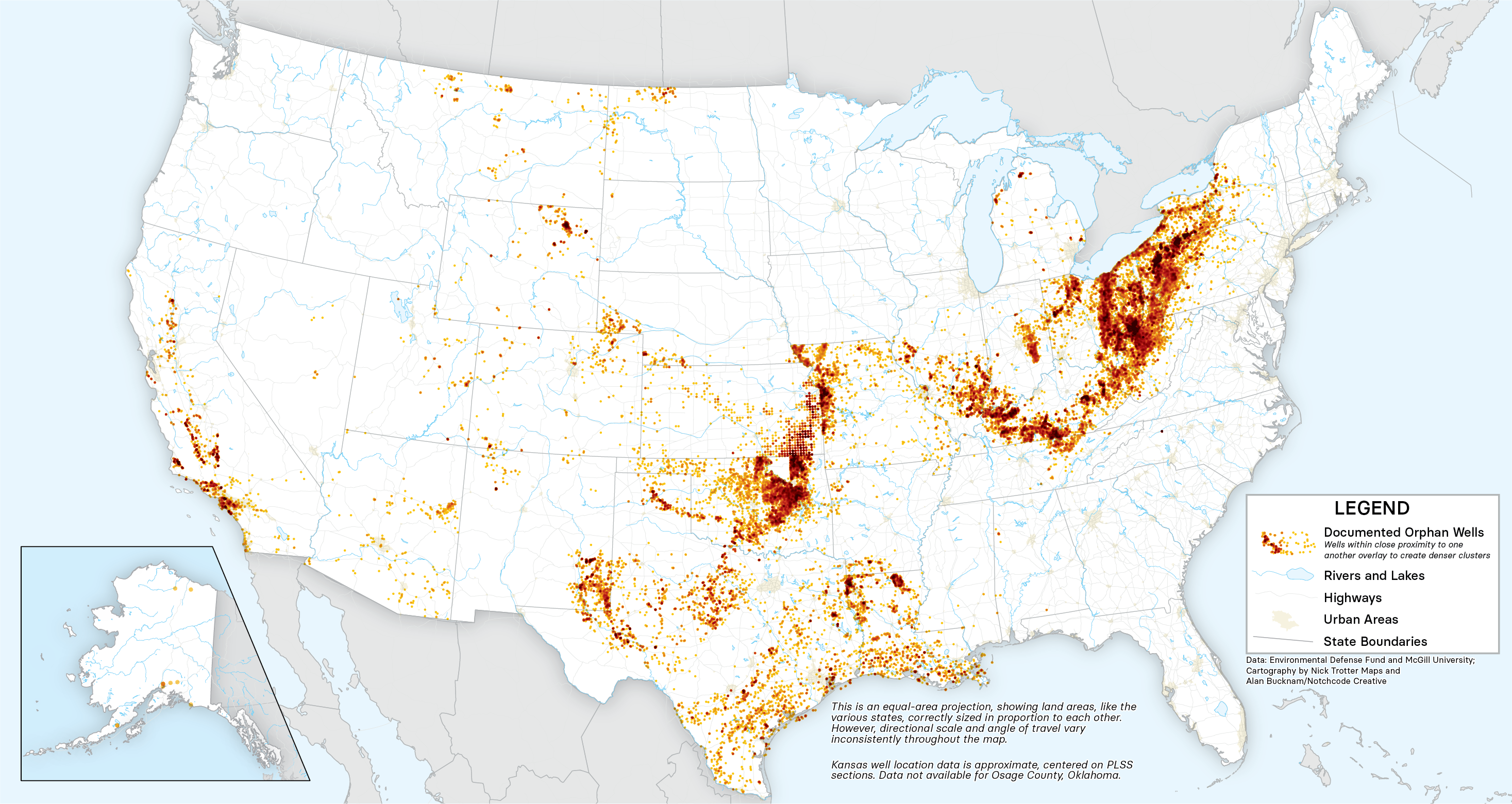 This is a map of more than 120,000 documented orphan wells that are eligible for closure funding under the Infrastructure Investment and Jobs Act of 2021. These wells, which have no solvent owner of record, can leak oil, gas and other toxic chemicals into our air and water. Plugging these wells will protect our environment, climate and communities while creating well-paying, stable jobs.

Orphan wells and their dangerous impact

While oil and gas operators are required to seal wells at the end of their productive lives, one hundred seventy years of oil and gas development has nonetheless left a massive inventory of so-called "orphan" wells across the United States — oil and gas wells that are inactive, unplugged, and have no solvent owner of record. This map covers the 120,000 documented orphan wells eligible for federal closure funding, but estimates of additional undocumented orphan wells range from the many hundreds of thousands to several million in the U.S. alone.

These wells pose significant risks to human and environmental health by leaking toxic chemicals into the air, contaminating groundwater and emitting methane, a powerful greenhouse gas. The United States Environmental Protection Agency (EPA) estimates that methane emissions from over 2 million inactive, unplugged wells, of which documented orphan wells are a subset, range from a CO2 equivalent of 7-20 million metric tons per year (approximately the emissions of 2 to 5 million cars). They can also lower property values and land productivity, with one study in Pennsylvania showing a 50% drop-off in building development in areas with high orphan well concentration.

A down payment on plugging wells

The states, federal agencies and Native American tribes responsible for their plugging and remediation often don't have the funding (currently averaging $75,000 per well, and sometimes exceeding a million dollars) needed to safely and effectively clean them up. So, for generations, huge numbers of these wells have been left to pollute our communities.

As part of the 2021 Infrastructure Investment and Jobs Act, Congress passed the REGROW Act (S. 1076). This legislation, for the first time, allocated $4.7 billion to plug orphan wells across the country and lays the groundwork for reducing the number of unplugged orphan wells going forward. Initial grants totaling $560 million have already been distributed to states and plugging work has started. This legislation will create tens of thousands of well-paying, stable jobs and protect communities from air, climate and water pollution.

The REGROW Act is a critical step forward in plugging the hundreds of thousands of existing orphan wells. However, among the currently active fleet of around a million production wells, hundreds of thousands are low-producing and could be orphaned in the future in the absence of policy change. We must invest in plugging existing wells that have no solvent owner, but also take action to ensure current and future active wells are timely plugged with industry dollars at the end of their useful life. In short, we can’t let this problem happen again.

What this means in practice is reforming the state and federal rules concerning financial assurance (often referred to as bonding), idle well management, and well transfer. All too frequently, operators only have to put up pennies on the dollar to ensure plugging in case of bankruptcy, and then transfer the assets to increasingly insolvent operators who are allowed to idle their wells essentially indefinitely until the operators disappear, leaving the public with a largely unfunded liability. While some state and federal land management agencies in charge of wells are grappling with this problem, meaningful and broad-based reform is essential in the near term, as hundreds of thousands of low-producing wells across the country teeter on the edge of bankruptcy.

This count is a snapshot in time — as of spring 2022 — and many states are modernizing their databases, confirming the location and legal status of suspected orphan wells, and removing wells that are plugged. But while numbers will continue to fluctuate in the future, this map is a fair portrayal of the location and density of documented orphan wells around the country, with especially dense swaths in Appalachia, the industrial Midwest, the Southern plains into the western Gulf Coast and urban Southern California.

The documented orphan well data set from 2022 is available for download (source: Documented Orphaned Oil and Gas Wells Across the United States).

How you can help

Methane emissions from oil and gas wells, including orphan wells, remains a significant driver of short-term climate change — at least 25% of today's warming is driven by methane from human activities.

EDF led the effort to pass the REGROW Act, which will invest $4.7 billion dollars to find and plug orphan wells. This is a truly transformational investment. However, we are not done. While we continue to work with states to implement this funding and ensure as many wells as possible are plugged, we are also launching new work to help prevent future orphan wells by passing reforms at the state level. Please help this effort by donating to EDF today.