Power plants are America’s single largest source of the pollution that causes climate change. Right now, there are no national limits on the amount of climate-destabilizing carbon pollution that power plants can emit.

The U.S. Environmental Protection Agency (EPA) has proposed new standards that would, for the first time in our history, rein in the amount of pollution from new power plants. EPA held a public hearing in Washington, D.C. today about those proposed standards.

“America has a vast array of solutions to power our businesses and homes with lower emitting sources of energy,” said Warner in her testimony. “The proposed carbon pollution technology for new coal plants is being deployed around the world, and here in North America at plants in Canada, Mississippi, California, and at two plants in Texas.”

More than four million Americans have sent comments to EPA in support of the proposed carbon pollution standards for new power plants. (You can submit comments to EPA through EDF’s website.)

Ads in support of the proposed rule are now running online: 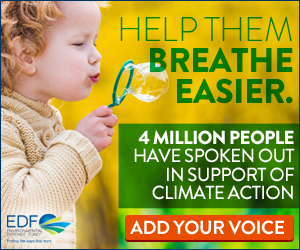 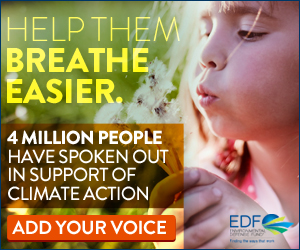 Climate change caused by carbon pollution is a risk to public health and safety, linked to increased asthma attacks, the spread of infectious diseases, and more extreme weather disasters.

“EPA’s proposed limits on carbon pollution from fossil fuel power plants are essential to address climate change, to drive innovation in clean energy solutions, to ensure a steady flow of cost-effective and cleaner electricity to power our economy, and to protect the health and well-being of Americans,” said Warner in her testimony.