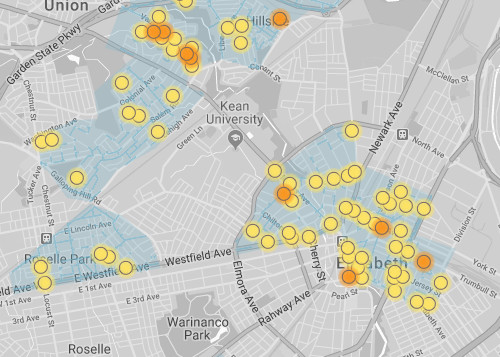 Unfortunately, the device you're using can't show this complex interactive map. Please visit again on a tablet or computer.

Our readings indicated an average of about one leak for every 1.7 miles we drove within the study area.

Readings are from April 2016 through January 2017. This map represents a snapshot in time, and may not reflect current leaks due to repairs or other changes since then.

Note: Roads driven outside shaded regions of the map are not part of the Elizabethtown Gas service areas.

Most leaks don’t pose an immediate threat to safety or health, but some can. We have shared all data with Elizabethtown Gas, including any recorded leak points observed outside designated drive areas shown on the map.

If you ever smell gas, or have any reason to suspect a problem, experts say to immediately exit the building or area, then call the authorities. For more see the Elizabethtown Gas safety page.