Congress has a plan to fight climate change and build a more just America. Here's what you should know.

By Fred KruppFollow
Fred has been EDF's President for more than 30 years
Published July 1, 2020 in ClimatePolitics

Our country is no stranger to hardship. Over the past century, when times were tough, people came together and our government took bold action that guided us toward better days.

Our resilience and penchant for recovery and renewal is part of what defines us as Americans.

Today, we are again facing difficult times. We are fighting through an unprecedented public health pandemic, an economic downturn, and systemic racism and injustice. But just as we have done before, leaders are emerging on Capitol Hill with a bold plan that meets our immediate economic and health crisis while also strengthening our country for all Americans over the long-term.

Representative Kathy Castor, Chairwoman of the House Select Committee on the Climate Crisis, and her committee, recently released a report that provides dozens of good ideas for reinvigorating our economy, putting people to work and building the 100% clean economy we need.

Chairwoman Castor and her colleagues understand what it takes to rebuild a better, healthier and more just America. 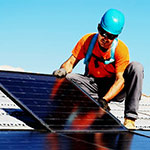 Solving the climate crisis
Read a summary of the report on creating a clean energy economy and a healthy and just America.

Their report gives other Congressional leaders the policy prescriptions to address climate change, and while doing so, build a robust and sustainable economy for American workers, small businesses and future generations.

We know that Black and Latino neighborhoods are burdened with disproportionate impacts from climate and air pollution. That’s why the recommendations in this report seek to promote equity by ensuring these frontline communities are prioritized for clean energy and infrastructure investments. These are important steps: we also need to get serious about reducing toxic pollution in these communities and ensuring that community leaders have an influential voice in the policymaking process.

Solving climate change is not a distant dream or an unachievable goal. Unlike the Trump Administration, the authors of this report listened to scientists in outlining steps we can take today to save our planet from further destruction.

How we can rebuild better

At Environmental Defense Fund, we have long supported the climate solutions highlighted in this report—including aggressively cutting oil and gas methane pollution that is over 80 times more potent than carbon dioxide in contributing to warming in the short term, and promoting and investing in community resilience to better adapt to extreme weather like flooding and drought.

EDF supports robust investment in American clean energy that will create durable, good-paying jobs right away in all 50 states, reduce deadly air pollution and help avert the worst impacts of climate change — which is putting the health and well-being of our communities at extreme risk.

Cleaning up our transportation sector by rolling out more electric vehicles such as buses and medium- and heavy-duty trucks will help curb climate pollution, create good manufacturing jobs and reduce health impacts in neighborhoods that have, for too long, suffered far more than their share of air pollution. It’s also critical that we power our fleet of electric vehicles with clean power, so I’m pleased that the Special Committee is also recommending the electricity sector move aggressively toward renewable energy.

A launch point to a 100% clean economy

The Select Committee took the time to dissect nearly every facet of our economy, and as a result, this report can serve as a launch point to achieve a 100% clean economy by midcentury—meaning that we don’t release any more climate pollution into our atmosphere than we can remove.

Securing a 100% clean economy by 2050 is consistent with what scientists tell us is needed to avoid the worst impacts of climate change. That is why it is time to get to work.

This proposal emphasizes many points of bipartisan agreement, such as investing in American innovation, promoting domestic manufacturing, and rewarding the job-creators who successfully drive us towards a clean future.

Chairwoman Castor and the committee, with strong support from Speaker Pelosi, created the plan we need to defeat the climate crisis. Now it is time for our elected leaders to turn this report into legislative action and help America emerge from this economic recession stronger, healthier, and safer.

Environmental Defense Fund, our members, and our partners across the country are more than ready to do our part.Once again, it’s time to rise to the occasion and rebuild a better America.

Triple your impact with a $2-for-$1 match. Give now