By Fred KruppFollow
Fred has been EDF's President for more than 30 years
Published May 10, 2017 in ClimateEnergy \ Natural gasHealth \ Air qualitySciencePolitics

When they tell the story of environmental protection in the early days of President Trump’s administration, today’s Senate vote upholding rules to reduce natural gas waste on federal lands will stand out as a breathtaking and much-needed win for activism, civic engagement and common sense.

The Senate turned back, for now, a disturbing push to ignore basic science and common-sense economics.

It rejected an attempt by the Trump administration and Senate Republicans to overturn the Bureau of Land Management’s methane pollution rule, a resounding triumph of cooler heads over rank ideology and special interests. The oil and gas industry and the administration fundamentally misread the mood of the American people.

It is the first big win this year for the environmental community – and a clear sign that when we fight back, we can still protect American families and defend our natural heritage.

We won’t win them all. But we won today, and we should allow ourselves to feel good about that.

What might at first appear like an issue reserved for energy policy wonks – oil and gas producers squandering natural gas on federal and tribal lands via widespread leaks, intentional venting or flaring – resonated with broad swaths of the American public. Across party lines, 73 percent of Americans support laws that stop gas leaks, and two out of three oppose rollbacks of current oil and gas laws.

They have good reason: Taxpayers dislike government waste, and overturning the methane rule would have resulted in more than $300 million in wasted natural gas over the next decade. By volume, we’re talking about enough gas to heat every home in Chicago for a year.

And this is to say nothing of the health and economic dangers methane poses as a short-term forcer of global warming.

The rule nearly fell victim to a formerly obscure legislative tool called the Congressional Review Act, which not only kills the reform but bars any rules that are “substantially the same” from being passed in the future.

This is the worst kind of policy making. So far this year, it’s been used to allow coal companies to pollute local waterways with industrial wastewater, and to make it easier for mentally ill people to buy guns.

Yet, while other objectionable legislation sailed through the congressional review process, the administration was unable to muster votes for this rollback. No one who voted in November wanted public lands plundered, our energy resources squandered, or our health put at risk. A majority of senators understood that.

Among many others, I particularly thank Senators Cantwell, Carper, Collins, Graham, Heitkamp, Manchin, McCain and Udall for listening to their constituents and standing up against unchecked waste of our national energy resources.

Support from all corners

This attack failed because communities most affected by this decision spoke up. Hundreds of thousands took to the streets to support science and to demonstrate their belief in global climate action, including methane policies that favor voters, rather than special interests.

A broad spectrum of Americans – from farmers and ranchers to tribal and community leaders to families - are willing to make their voices heard, and are effective when they do. This sends an important signal to state leaders and officials in other parts of the world that the United States is not abandoning its environmental values.

No agency has ever reissued a rule to replace one rescinded under the Congressional Review Act, and no court has ever addressed whether such a rule is valid. This is why former officials of the U.S. Department of the Interior and 40 law professors wrote to Congress to oppose the process.

If the oil and gas sector wants to be seen as a responsible player on the energy scene, they must take an active role in preventing methane leaks. It’s also good business.

“Repeal would be a costly and wasteful mistake,” noted Todd Mitchell, a former oil and gas industry official.

Far outside the beltway, Westerners were among the most vocal supporters of the common sense regulations to reduce methane waste.

“The thought of a bunch of disconnected lawmakers who don’t live next to leaking gas wells deciding to vote to take this protection away from us just leaves me speechless,” New Mexico cattleman Don Schreiber told the Los Angeles Times.

As we savor a hard-earned victory, we can’t turn a blind eye to the challenges yet to come.

The threat isn’t hypothetical, or over

The fight to protect and defend bedrock health and environmental protections and progress is far from over. 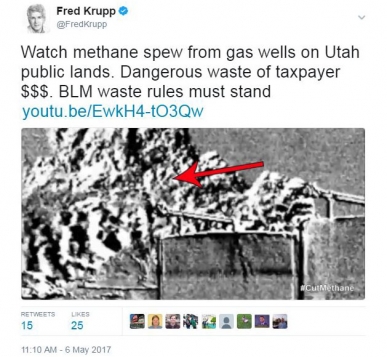 Methane leaks are a national problem

While industry and Congress expected to win easily, their loss today is the consequence of extreme overreach. A broad range of communities will note who stood with us and who stood against us.

If oil and gas industry ideologues continue to try to undermine the basic protections through the U.S. Environmental Protection Agency and BLM agency reviews, today has demonstrated the tenacious, unyielding resistance they will face.

We need to hold the 49 Republican senators [who voted in favor of overturning the methane rule] accountable.

Fracking: On a 20-year timescale, methane (which is the principal component of natural gas) has 84 times the global warming potential of CO2. That’s important, because on our current global emissions pathway, we only have about 27 years left before we lock in levels of warming that scientists and governments classify as “dangerous.”

Simply put, cutting methane immediately is the biggest bang for our apocalypse-prevention buck.

Fracking over the next 40 years shows levels of methane gas that will kill the world before global warming: http://www.vox.com/2014/10/7/6934819/oil-prices-falling-russia-OPEC-sha…

When lawmakers put money ahead of the health of the citizens and the protection of our planet's resources, they deserve to be given the boot. Thank you to those Republicans who broke rank and voted for clean air and a promise for our future.

Thank all of you who decidedly voted to save our planet and promote health, humankind and save our cherished natural habitats!