Why California thirsts for rain and the East Coast gets soaked

By Ilissa OckoFollow
Ilissa is an EDF Climate Scientist.
Published October 14, 2014 in ClimateScience

If you think the weather’s acting strange, you’re correct. Extreme weather in the United States is trending upward, and human-caused climate change has already been blamed for much of it – most recently in connection with the California drought.

But along with extreme weather we’re also getting extreme contrasts. What on Earth is going on when New York gets endless rain and San Francisco none, and when one part of the country is freezing while another suffers under record heat?

You guessed it, rising temperatures have something to do with it.

In the Northeast, the combination of more moisture in the atmosphere from a warmer world and changes in circulation patterns are bringing more rain. In the Southwest, meanwhile, rainfall is suppressed by a northward expansion of high pressure in the subtropics.

The crippling drought now plaguing California is due to a persistent high pressure system off of the coast that is deflecting storms away from the region. A recent study shows that these systems are much more likely to occur with human-caused climate change.

Heavy downpours are controlled by cloud mechanisms and moisture content, which are both changing as global temperatures rise. Clouds that can dump a lot of rain are more common in a warmer atmosphere.

More evaporation has led to more moisture in the atmosphere which, in turn, leads to more intense rainfall when it rains. That helps explain why the entire U.S. is experiencing more heavy downpours – even in the drought-stricken West. 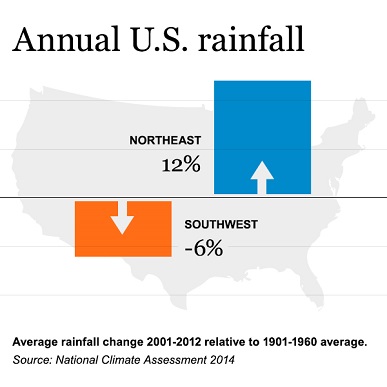 Rain and evaporation will determine how moist the soil will be. So although evaporation is increasing nationwide due to warmer temperatures, higher precipitation in the Northeast yields a net increase in soil moisture in that part of the country.

In the Southwest, on the other hand, the drop in overall precipitation brings drier conditions that spawn or magnify drought. As the soil there dries out, the incoming sunlight will heat the ground instead of evaporating water from the soil. This creates a vicious cycle of more heat and less rain.

The potential for flooding, meanwhile, depends a lot on what’s going on with the soil. The higher the soil moisture content, the higher the chance that there will be more runoff from rainfall.

Because soil moisture is increasing in the Northeast, flooding events are on the rise. Fortunately for the region, many heavy rain storms occur in the summer and fall when soil moisture is low and the ground can absorb more water.

On the other hand, the sea level has risen by a foot since the 1900s in the Northeast. That, in turn, contributes to more flooding.

Disaster costs are also rising – but there is hope

In 2013, intense storms, severe regional drought, and extreme flooding led to more than $9 billion in disaster costs in the U.S. alone. It’s uncertain what the total bill was if you factor in ongoing agriculture, human health and infrastructure losses from changing weather conditions

Unless we curb emissions of heat-trapping gases, scientists expect these trends to continue and worsen – and the contrast between wet and dry areas of the U.S. will likely become even sharper. Our hope now is that the push for climate action amps up so we can finally set ourselves on a better path for the future.

How are we able to do anything when we have a President that doesn’t believe there is an issue with the climate? That it has nothing to do with man causing the problem?

I live in Arizona which you know gets pretty Dagone hot! We have in the state an area called the petrified forest. Arizona was once a forest. Then it became submerged under an ocean for millions of years. When the water levels fell eventually it left behind a forest of petrified trees ! All this happened before the onset of humans. How was this possible? The answer is the earth goes through climate cycles constantly. Including several ice ages. All this without any human intervention. Are we contributing? Maybe so. I will submit to you not as much as Mother Nature itself.

Fred, I don't think this addresses the point. There is no argument that nature plays the dominate role and is constantly changing the surface. The forest was in a subtropical region of Pangea at the time (~225 MYA). Different location on the globe with different ocean currents, so sure, over 200 million years, it changed significantly. Having nature be the dominant force does not exclude human effects. So, the message is that humans are moving the climate and that there will be changes. Even if those are less than what nature can deliver, the effects that the climate scientists describe are on a time scale that is orders of magnitude faster and significant enough to cost trillions of dollars. Anyway, the petrified forest is a pretty awesome spot to visit :) Best - Jeff

There always seems to be an argument to what is causing our climate to change. I can put it this way: We have billions of vehicles on Earth spewing gases into the atmosphere every day. If you closed up your garage with your car running, how long do you think you would survive? Now, of course Earth is much larger and there are things that make fresh air for us, ut all this carbon has to go somewhere. Warming!

This is going to sound weird, but here it goes. I live in Raleigh, NC. Every single day I can stand outside and watch jet planes fly over leaving long engine exhaust contrails by the 100s. Those contrails will spread and turn into low cirrus clouds and cover the sky. The next day we get a pouring rain for two days. Then the sky goes totally clear blue and the contrails build again … and it rains again. Could this be the real cause of climate change ? And … could this help with the fires in California ? Sounds silly, but come stand here and see for yourself.