This female scientist ignored the doubters. Good for us.

"I came to EDF to apply science to critical, real-world issues." 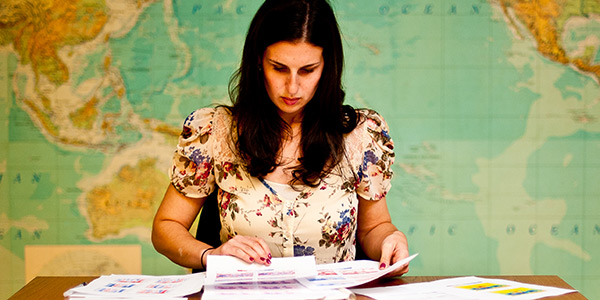 Ilissa Ocko, a climate scientist at EDF, analyzes climate model data as part of her research.

Ilissa Ocko always wanted to be a female version of Bill Nye, “the science guy,” that plain-talking scientist who explains complex concepts to kids.

Today, she’s an EDF scientist who tells us in plain English how climate change makes hurricanes more intense, pushes clouds toward the poles and warms the oceans.

For this Q&A, we asked her how she got interested in climate science and how she feels about where the climate is headed.

Q: Girls aren’t always encouraged to be scientists. How did you get into the field?

Ilissa Ocko has published articles in three peer-reviewed journals based on her analyses of climate model data.

A: I definitely encountered, and still do, people who don’t take me seriously, not only because I’m a woman but because the way I present myself doesn’t really jibe with most people’s idea of a female scientist.

When at the end of grad school I won an award that’s given to just three Princeton graduate students each year, I thought, “OK, you all doubted me that first year, but I made it.”

Even earlier, my grandpa Martin was a big influence. He was a professor of math and mechanical engineering and worked for NASA, developing systems to deflect space debris from the space station.

Q: How did you get into atmospheric science?

A: I always thought extreme weather was fascinating, but until I got to the University of Michigan, I’d never realized I could study hurricanes or clouds or the sun.

Then I heard a professor talk about how he wanted his students to chase tornadoes or hang glide into storms with instruments strapped on, so we’d be “one with the atmosphere.” I found my calling.

I eventually realized I was more interested in computer modeling than in field work. I went to Princeton for grad school because it has a world-renowned climate modeling lab.

But I did go to Greenland in 2006 to hike around measuring atmospheric conditions, which changed my life. For the first time, I saw climate change firsthand.

Q: As a climate scientist, where are you focusing your energy?

A: My research is aimed at understanding the impacts of various pollutants and how EDF can be most effective in slowing climate change.

Ilissa Ocko presents her winning talk at the 2016 U.S. finals of FameLab, a science communication competition.

One of my first projects here was on the cookstoves still used by 3 billion people, which together contribute a quarter of the world’s black carbon emissions.

Now I’m working to quantify how much warming we can avoid through realistic measures to reduce methane, using available technology.

We have compelling results that show we could avoid a lot of warming if we went all in on methane mitigation. That's what EDF has done already over the past five years, working with industry and individual companies. It will have a big impact moderating future temperatures.

Q: Knowing the science, how do you feel about our future?

A: Well, that question is no longer so abstract to me. I recently had a baby, my first. So now, when I look at a date like 2040 and whether we’ll hit 2 degrees of warming, I think: “That’ll be my daughter’s college graduation.”

Since Trump became president, I have had tough moments, because, yes, the science is scary, and it’s clear that if we don’t act, things are only going to get far worse. And now solutions are being rolled back.

But I still see so much forward movement and so much energy.

My generation entered the field of climate science knowing that humans are the cause and grasping the magnitude of the challenge — and feeling driven to solve it. When you take it apart, what seems an overwhelming problem becomes manageable.

You say, as EDF does, “OK, we’ve got to tackle these gases from these sectors in this group of countries.” Then I know: We can do this.