By Ilissa OckoFollow
Ilissa is an EDF Climate Scientist.
Published October 3, 2017 in ClimateSciencePolitics

The disaster unfolding in Puerto Rico is heartbreaking – and a call for action.

Our focus as a nation must be to help our fellow citizens as quickly as possible, but also to do what we can to prevent similar catastrophic events in the future.

With three Category 4 hurricanes – undoubtedly worsened by climate change – making landfall and wreaking havoc in the United States in just a few weeks, we’ve had three wake-up calls. Climate change is an urgent issue that must be addressed now.

By continuing to ignore the fundamental threat that global warming poses today, however, the Trump administration is setting up Puerto Rico and the rest of the Hurricane Alley region for more disasters and tragedies.

It’s akin to a doctor who treats the symptoms of a patient while ignoring a dangerous, underlying disease. It makes for a bad doctor – and America expects more than that.

Considered a “canary in the coal mine” for climate change, the Commonwealth of Puerto Rico has been feeling the consequences of a warming world for some time already.

Its beaches are retreating with some homes in the capital of San Juan and in Rincón, a popular surfing town, actually falling into the ocean amid rising seas – and coastal flooding is getting worse.

That’s not all: The island is also challenged by intensifying tropical heat, heavier downpours and – as we just saw with Hurricane Maria – its location in the path of stronger hurricanes.

When rebuilding Puerto Rico, we need to help the island become more resilient to such impacts of climate change – while doubling down on curbing emissions that cause the problem in the first place. 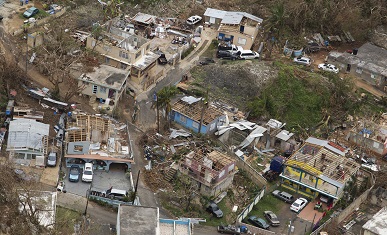 Roofless homes in Puerto Rico after the storm. Photo: FEMA

A vast majority of the Puerto Rico’s population of 3.4 million, more than 85 percent, lives within five miles of a coast that is threatened by the rising ocean.

Like islands in the South Pacific, it’s seeing sea level rise of about half a foot on average from melting land ice and warmer ocean waters. This trend, which is accelerating, has made roads, ports and other infrastructure that are key to Puerto Rico’s economy more vulnerable.

As we’ve seen over the past few weeks, sea level rise compounds the impacts of hurricanes when worsened storm surge causes flooding in communities along the coast. The resulting damage from this and other climate impacts has a direct effect on Puerto Rican daily life as well as on tourism, which accounts for 8 percent of the island’s economy.

Climate impacts are getting worse

Scientists predict Puerto Rico will see a sea level rise of 22 inches by 2060. That translates into a lot more storm surge, more destroyed property and even bigger hits to the nation’s tourist economy.

The science is clear: Rising temperatures and heavier rainfall both play a key role in intensifying hurricane strength and destruction.

Ninety percent of excess heat is absorbed by the oceans and this warming water energizes hurricanes and evaporates more water into the atmosphere, increasing the amount of rainfall in storms – just like we’ve seen in recent weeks.

All these challenges will escalate in coming decades.

These fellow Americans deserve our help

As we see in Puerto Rico today, it’s the most vulnerable among us who feel the impacts of climate change the most. They need our help to build a better and stronger future.

Treating the symptoms of climate change is absolutely essential. We must come together quickly as a nation and help our fellow Americans through this crisis.

But treating the underlying disease – heat-trapping gas emissions – is equally essential. Or the devastation we’re witnessing in Puerto Rico will keep happening.