What needs to happen at
the UN climate talks

Climate change is speeding up, the United Nations' most recent climate report says. After decades of procrastination, the world now has just a few short years left to slash greenhouse gas emissions in half or face catastrophe.

That's the backdrop as world leaders converge on Glasgow, Scotland, this November for the 26th annual Conference of the Parties to the U.N. Framework Convention on Climate Change — COP, for short.

We sat down with EDF's Kelley Kizzier, a seasoned veteran of these climate talks, to give us the lowdown on COP and what needs to happen there this year.

A. Every year, for almost three decades, the world has gotten together to hammer out a global response to the climate emergency. It’s high-stakes international negotiations and the world’s largest climate tradeshow all happening at once.

Q. How did COPs begin?

A. COPs got their start back in 1992 at the Earth Summit in Rio. That’s where the world got together and designed and signed the U.N. Framework Convention on Climate Change, which basically set out ways we would avoid the most disastrous effects of climate, but with no specific targets. Five years later, we got the Kyoto Protocol which gave developed countries emission reduction targets.

It took 21 COPs to get the Paris Agreement, which, for the first time ever, says that all countries will have climate targets to keep the world well below a 2 degree Celsius temperature increase (3.6 degrees Fahrenheit) — aiming for 1.5 degrees Celsius (2.7 degrees Fahrenheit), as the science demands. 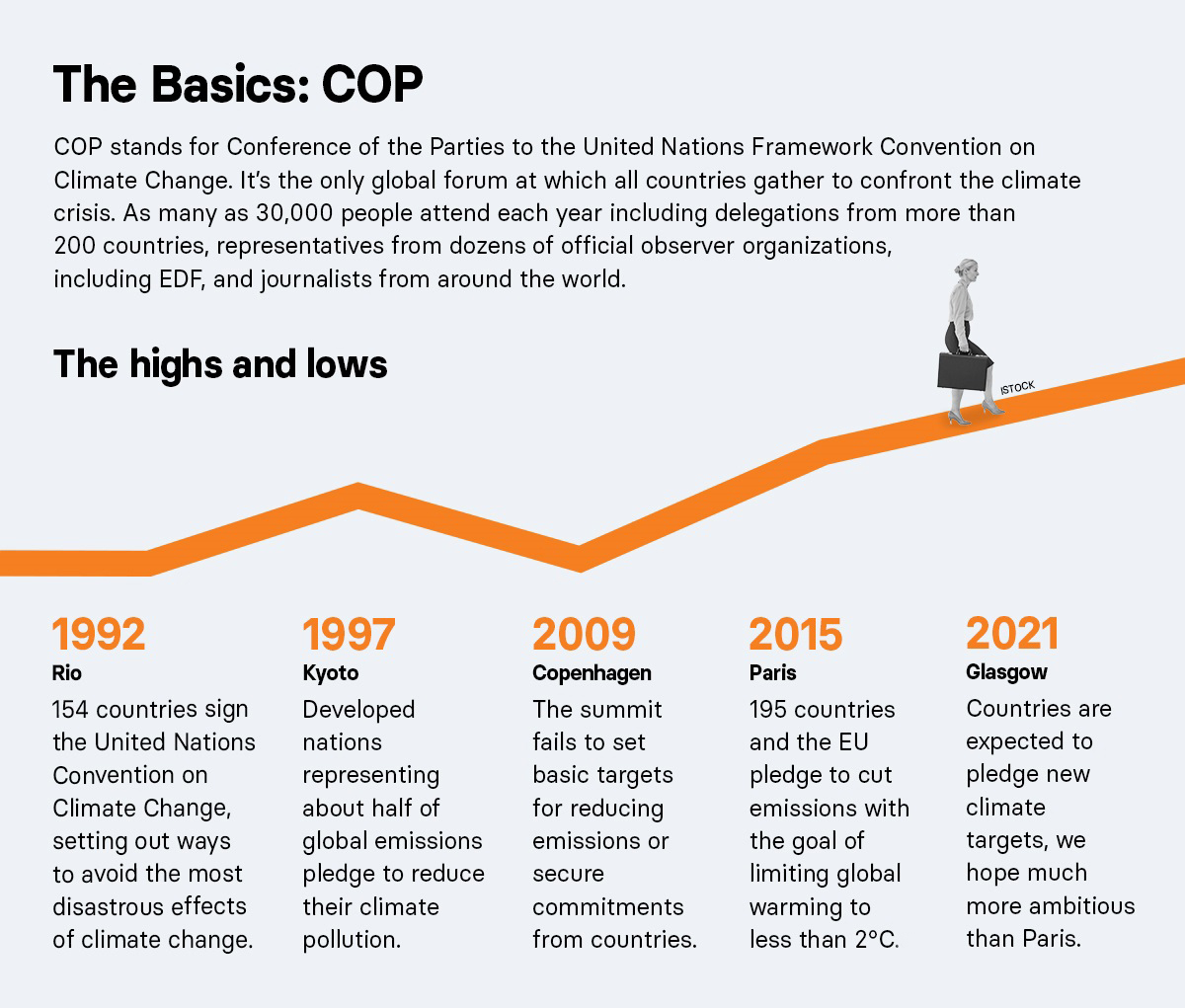 A. The simple answer is that we have to make it possible, because the alternative is catastrophic disruption to life on Earth as we know it. But if the world can slash emissions by half by the end of the decade, that leaves the goal of net-zero emissions by around midcentury still in reach. And the best available science says that’s where we need to get to in order to hold the line at 1.5 degrees Celsius.

Q. What makes this COP so critical?

It’s the deadline for countries to announce new national emission reduction targets. It’s a really pivotal moment, because the targets countries submitted five years ago aren’t good enough and would put the planet on a collision course with catastrophic climate change.

To chart a new course, the world needs to up its game at COP26. The EU, U.K. and U.S. have all come forward with really solid targets that are in line with the scale of emissions cuts we need to cap global warming at 2 degrees Celsius, or even 1.5 degrees. But we need the rest of the world, especially countries like Russia, Australia, South Korea, Japan, Brazil, India and China to follow suit.

We just might have the right mix of urgency and momentum to push the planet back on track.

Q. What else do we need to see happen?

A. We need progress in two other key areas: We need richer countries to follow through on their commitments to help poorer countries, and we need agreement on the rules governing how carbon markets work.

In 2010, rich countries pledged that by 2020, they would give $100 billion per year to poorer countries to help them reduce emissions and increase resilience. We are nowhere near meeting that target. We also know that public sector finance will not be enough. We need private sector investment to begin to scratch the surface of what it will actually take to help the world transition to clean economies and prepare for the impacts of climate change.

And we need to complete the Paris rulebook. In 2018, we finished all the rules for implementing the Paris Agreement except for the rules governing carbon markets. These are incredibly complicated and incredibly important. EDF has calculated that the world could double its emission reductions for the same cost if international cooperation through carbon markets was done right.

Q. What gives you hope?

A. It has been years since there’s been this much energy and excitement around a COP. Everyone is fired up imagining what is possible. The world is pivoting back to climate action. The U.S. has rejoined the Paris Agreement and is leaping back into climate leadership. The EU is charging full steam ahead transforming its groundbreaking goals into action. We just might have the right mix of urgency and momentum to push the planet back on track.