How to find the most cost-effective ways to cut carbon

The science is clear: The U.S. needs to drive down carbon emissions to net-zero by 2050 in order to avert the most catastrophic impacts. What’s less clear is how policymakers should chart the path there with so many carbon-cutting policies and technologies to choose from.

Using the latest energy models, EDF teamed up with Evolved Energy Research to create a new and improved cost curve that provides a roadmap for policymakers exploring ways to get to net-zero carbon emissions. The curve demonstrates the need for policymakers to support big, low-cost cuts in carbon emissions now, as well as the need to support the development of newer technologies that can help get us past the finish line.

What is a Marginal Abatement Cost curve?

When considering ways to cut emissions, policymakers have often used a tool called a marginal abatement cost (MAC) curve to compare the cost and emissions impact of different technologies. However, traditional MAC curves, like the one popularized by McKinsey & Company in 2007 below, have noted limitations.

Since they only look at a single measure at a single time, they do not show how technologies interact in the energy system or how to scale and sequence investments over time — questions that matter enormously for driving down emissions at the pace and scale we need to beat the climate crisis.

The MAC curve by McKinsey & Company. This curve orders measures along the x-axis, where the width of each measure indicates the estimated emission reduction and the height along the y-axis represents the measures’ marginal abatement cost (the cost of reducing one more unit of pollution)

Our MAC 2.0 curve shows the annual carbon pollution reductions from different measures across the energy system that become accessible at different marginal abatement costs — or the incremental costs of reducing carbon pollution. It also offers insights on the optimal timing and sequencing of actions over the next three decades.

Moving from top to bottom, the curve shows how emissions decline as more measures become cost-effective and therefore more accessible at higher marginal abatement costs. In other words, the highest point on the y axis represents emissions from the baseline scenario and the lowest point shows how all measures deployed in coordination could lower carbon emissions from industry and energy use to net-negative levels.

Each segment represents an individual measure, such as onshore wind, and colors correspond to related groupings of measures (e.g. electricity).

Example: How to Read the MAC 2.0 Curve

You can examine the technology deployment and reductions in annual emissions at a single marginal abatement cost, such as $0 per ton, or in a range of costs, such as $0 to $60 per ton.

At this particular cost range, the electricity and transportation sectors contribute the bulk of the reductions (as shown by the width of these measures in blue and green, combined). Measures like zero-carbon fuels, on the other hand, contribute very little reductions because they are not yet cost effective.

Zooming in on the different cost ranges offers more insights on 1) technology deployment levels, including at which marginal abatement cost particular technologies become accessible, 2) emissions impact of specific technologies and 3) policy implications. Click the cost ranges below to explore. 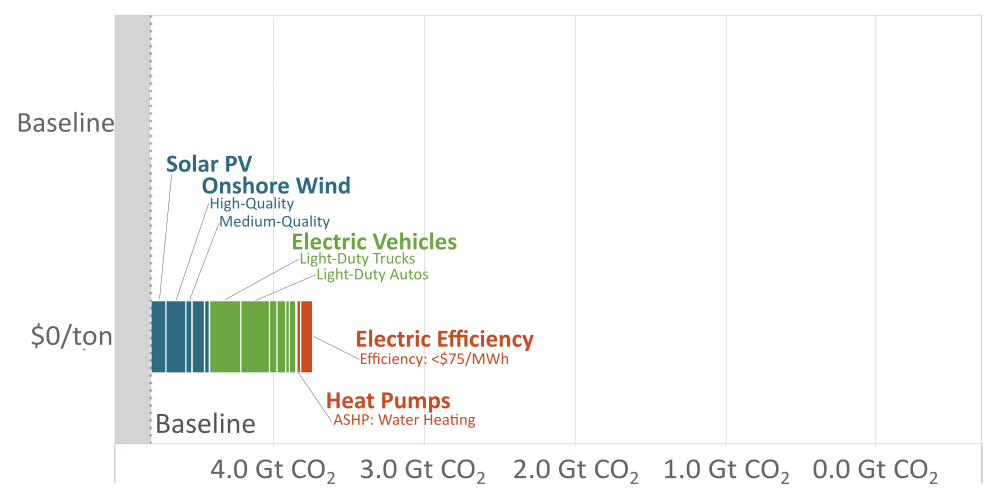 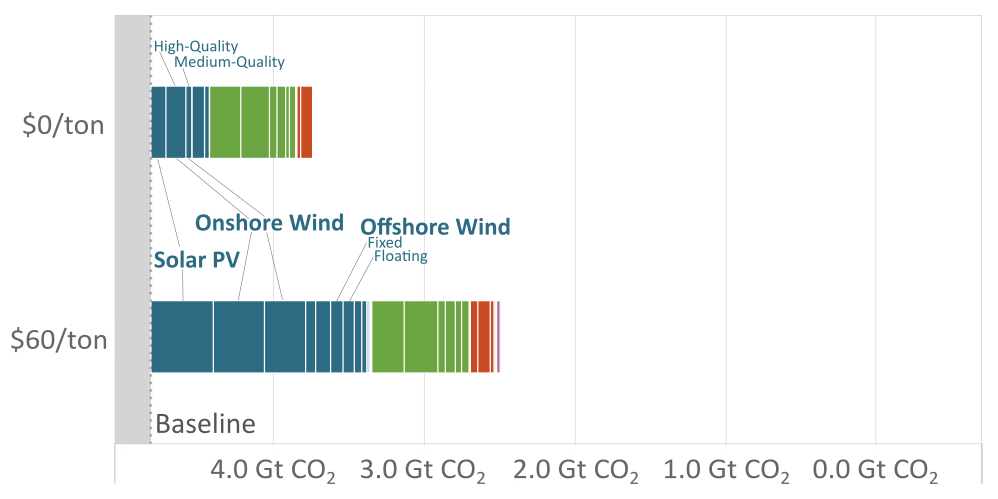 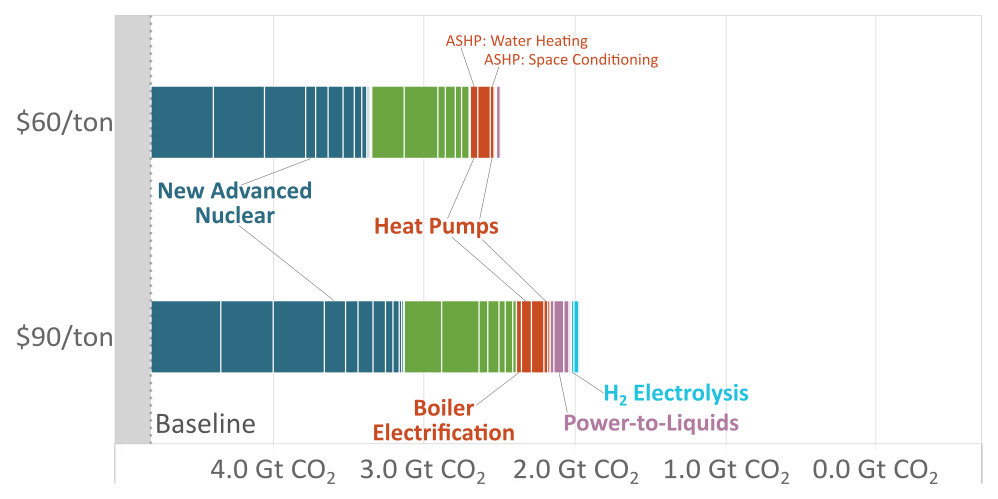 Explore further with an interactive version of the MAC 2.0 curve

In this interactive version at the link below, you can select an individual measure to see its potential to reduce emissions in million metric tons (MMT of savings) at different marginal abatement costs (MAC) on the x-axis. The ranges I-VI denoted on the x-axis categorize the MAC ranges described above.

You can also select multiple measures to see their collective potential to reduce emissions.