Dr. John Mimikakis is vice president of EDF’s Oceans Program. Based in Singapore, John works with policy makers, scientists, economists, and partner organizations to create healthy and abundant oceans that benefit people and nature in the Asia Pacific region.

John has also fought to advance climate change legislation in the U.S. Congress. And previously he served for nearly a decade in a variety of science and environmental policy advisory roles in the U.S. House of Representatives.

John received his Ph.D. in Biochemistry at the University of Wisconsin and his Bachelors of Science at Tulane University, and is a former recipient of the American Chemical Society’s Congressional Science Fellowship.

John has also worked at EDF as a Senior Policy Manager in the Climate & Air program where he developed global warming solutions within transportation, power-generation and agricultural sectors, by raising support on Capitol Hill for effective greenhouse gas emissions reduction policies. From 2001 to 2006, John was Deputy Chief of Staff for the Committee on Science in the U.S. House of Representatives where he was involved in legislation on a variety of issues, including energy, environment, space exploration and technology policy. Prior to that, John served as a legislative advisor to U.S. Congressman Sherwood Boehlert (R-NY) on environmental, energy, and agriculture issues. In 1997, John was the American Chemical Society’s Congressional Science Fellow. 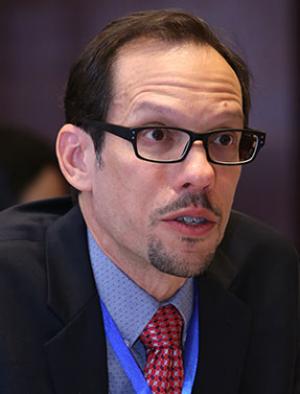