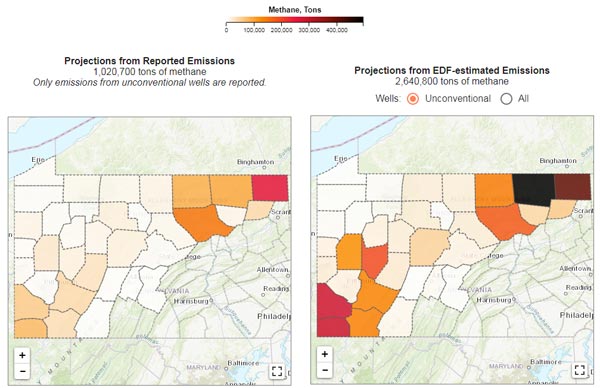 EDF analysis shows more than five million tons of methane pollution could be emitted by 2025, absent action from the state. Visit edf.org/PennsylvaniaMethane.

Methane is both a powerful climate pollutant and the primary ingredient of natural gas. The EDF analysis estimates Pennsylvania’s oil and gas operators emit more than 520,000 tons of methane a year, primarily from leaky, outdated and malfunctioning equipment. This wasted gas causes the same near-term climate pollution as 11 coal-fired power plants, and results in nearly $68 million worth of wasted energy resources.

The EDF analysis is based on peer-reviewed scientific research conducted at the state’s oil and gas sites in order to estimate the total amount of methane industry emits. The state’s published methane inventory, on the other hand, is based on data reported to DEP by operators, which significantly underestimate emissions, as not all facilities are required to report their pollution and operators who do report tend to use outdated methods for estimating emissions.

DEP announced it will finalize methane reduction requirements for new and modified oil and gas facilities by the end of March. The department also committed to regulating emissions from thousands of existing unconventional facilities within the next two months. EDF’s analysis finds this could reduce the state’s emissions by 25% — making bold action all the more urgent.

“We are pleased that the Wolf administration continues to promise bold action on methane. Pennsylvanians have known for quite some time that unchecked oil and gas pollution is making air quality and climate change worse, and now we have new insight as to just how severe and urgent this problem is,” said Andrew Williams, Director of Regulatory and Legislative Affairs at Environmental Defense Fund. “There is a clear, reasonable and cost-effective path forward for reducing the health, climate and economic risks of oil and gas emissions, and we look forward to working with Governor Wolf to make it happen for Pennsylvania’s communities.”

The EDF analysis also estimates oil and gas companies emit more than 54,000 tons of volatile organic compounds (VOCs) – nearly nine times more than oil and gas operators report to the state. VOCs contribute to higher ground-level ozone or “smog” levels in the region and can trigger asthma, respiratory illness and other health problems, particularly for people living in close proximity to oil and gas sites.

The analysis concludes Pennsylvania can reduce 60% of industry’s methane emissions by implementing a series of strategies already required in other oil- and gas-producing states. Without additional regulatory action from the state, more than five million tons of methane pollution could be emitted by the year 2025.

The EDF emissions analysis includes an online toolkit developed by Spherical Analytics that allows users to get a county-by-county view of pollution levels, as well as access information about nearby well sites and the number of schools and medical facilities located near oil and gas operations. Users can also compare the state’s reported emissions with EDF’s science-based estimates.

The interactive tool includes a feature that allows users to compare and model a variety of different pollution control tactics. They are based on real, cost-effective solutions other states have implemented in order to significantly reduce pollution, including:

The full report is now available online at edf.org/PennsylvaniaMethane