Perchlorate is one of approximately 10,000 chemicals allowed for use in food and food packaging – and it’s also an ingredient in rocket fuel. The Food and Drug Administration approved perchlorate for use in plastic packaging and food handling equipment for dry food – like cereal, flour, spices, and many other additives – to reduce the buildup of static charges.

Unfortunately, the chemical can migrate from plastic into our food. Perchlorate can also get into food when hypochlorite bleach (used as a disinfectant in food processing and to peel and to wash produce) is not managed carefully and allowed to degrade. 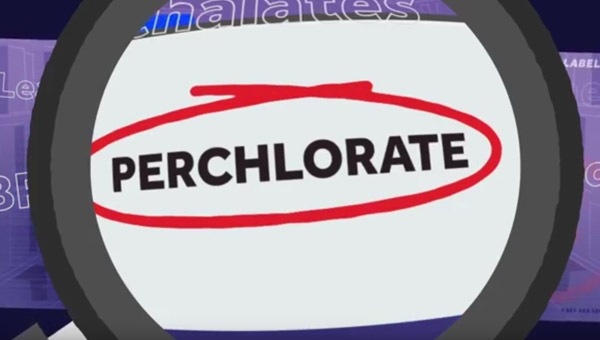 Video: What’s perchlorate and why is it in my food?

Why is perchlorate in food a concern?

For the estimated 20% of pregnant women who are already iodine-deficient, any exposure to perchlorate can pose a risk to a child’s healthy development. Exposure to the chemical is also of concern for adults with inadequate iodine consumption.

A study published by FDA in December 2016 showed that virtually all types of food contain measurable amounts of perchlorate, and some foods – including those marketed for young children – have shockingly high levels. Even more concerning, the amount of perchlorate in the diets of infants and toddlers increased 34% and 23% respectively from 2008-2012 compared to 2005-2006 (this is the period when FDA approved its use in plastic in contact with dry food.)

In May 2017, FDA rejected a 2014 petition by health and environmental organizations to ban perchlorate as a food additive. EDF and others challenged this move through a little-known legal tool, requesting a formal evidentiary hearing to secure an independent judgement of the agency’s decision. In April 2019, FDA denied the request. EDF, represented by Earthjustice, and other public health advocates filed a lawsuit to overturn FDA’s decision to continue allowing perchlorate in plastic packaging and processing equipment in October 2019.

To manage the risks posed by the degradation of bleach into perchlorate, EPA made an interim pesticide registration decision in May 2018 for bleach used to disinfect water. The agency is requiring changes to the bleach’s pesticide label to include recommended best managed practices intended to reduce the formation of perchlorate. Even though bleach used to treat food and food contact surfaces has the same risk of degradation if not carefully managed as bleach used for disinfecting water, as EDF noted in public comments, EPA’s changes did not affect use of hypochlorite bleach for food.