Sound policy has an impact but millions are still at risk

For decades, a sound national strategy has resulted in significant declines in children's lead exposure, but failure to update that strategy has limited progress.

Since the 1970s, the federal government has established more than 75 policies targeting childhood lead exposure. Some were major, like phasing lead out of gasoline and paint. Others were minor, like warning labels on hair dyes containing lead acetate.

EDF built this interactive chart to understand and track the relationship between policies and average blood lead levels of pre-school aged children. 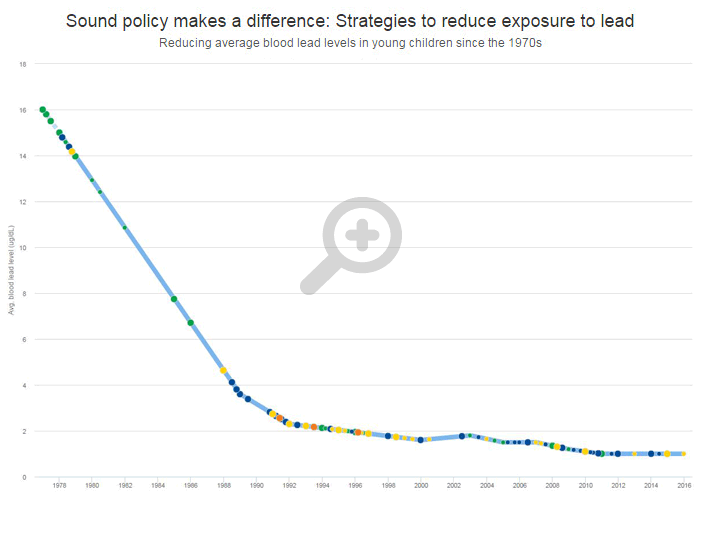 You can filter by the type of intervention and zoom in to look at specific years. Clicking on the chart points will reveal policy details and links to more information. An icon in the upper right corner of the box describes the type of exposure affected: food, air, water or consumer product.

There are limits to this chart. With so many policies and sources of lead, there is no way to connect a single policy to a change in blood lead levels. Also, some policies took decades to implement. For example, the phase-out of lead in automobile gasoline, which began in 1973, took 20 years to complete. And the 1992 lead-paint law mandated federal agencies to issue rules by 1996, but those rules were not finalized until 2008.

Still, half a million children today have elevated blood lead levels and poor and minority children remain at the greatest risk of lead poisoning. The good news is that policy changes can have an impact, but the job of protecting kids from lead is far from finished.

Updating and improving policies, and renewing our national commitment to lead poisoning prevention with a focus on the legacy of lead in paint and pipes, as well as continued use of lead in products, can protect children from the lifelong damaging effects of lead.