Report: Cutting energy waste on US federal, tribal lands could save millions

An in-depth analysis by ICF International estimates that fugitive and vented losses from oil and natural gas operations on federal and tribal lands amounted to over 65 billion cubic feet (Bcf) in 2013. This gas would be worth nearly $330 million at current prices. Mark Brownstein of EDF says "These losses, which are largely composed of the powerful pollutant methane, are an irresponsible use of taxpayer and tribal resources, and harmful to the climate."

This report, commissioned by the Environmental Defense Fund, also identifies and measures methane abatement opportunities from federal and tribal lands, building on a 2014 analysis that focused on emission reduction opportunities from the onshore U.S. oil and gas industry.

Following the release of this report, the Bureau of Land Management (BLM), under the Obama Administration, finalized rules requiring operators that drill on taxpayer and tribal-owned lands to curb natural gas waste and pollution. However, the Trump Administration is undermining these common sense standards at every turn.

The findings of this report underscore the need to protect and defend BLM's methane standards.

The oil and gas industry is wasting a valuable resource. Solutions to the problem are simple, but it's not going to happen without better oversight.

These cost effective methane emissions reduction practices identified include frequent leak inspection and repair (LDAR) programs, which are already being implemented in many areas.

Map: Federal lands are a significant source of methane pollution, with New Mexico and Wyoming reporting the highest emission levels. 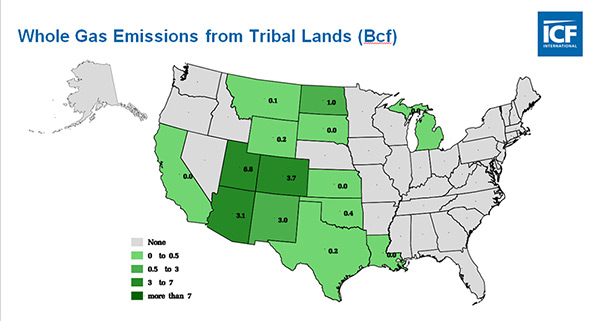