Years later: What’s ahead for the Gulf

In 2010, BP’s Deepwater Horizon rig exploded and created the largest offshore oil disaster in history, causing millions of barrels to leak into the Gulf of Mexico. April 2018 marked eight years since the spill.

Where are we now?

While the harrowing images of oil-soaked wildlife and beaches have subsided, science has revealed that the impacts of the spill are ongoing and significant.

BP agreed to settle out of court and pay more than $20 billion. A judge approved the settlement on April 4, 2016.

What kind of impacts are we still seeing?

The oil disaster caused incomparable damage to an already-stressed Gulf Coast ecosystem. From dolphins to sea turtles to birds, we still are seeing the real and lasting environmental impacts of one of the worst oil spills in our nation’s history.

But more mysterious and just as worrying is what scientists have a much harder time measuring, like the impacts on deepwater corals, zooplankton and various marine life that lives in the middle depths of the sea, explains EDF chief oceans scientist Douglas N. Rader.

"To top it off, all of this occurred near the Mississippi River Delta, an ecosystem already under enormous pressure," Rader says. This pressure is driven by century-old development choices that favored commerce and development over sustainability. And now research has shown that the rate of marsh shoreline erosion increased with oiling. 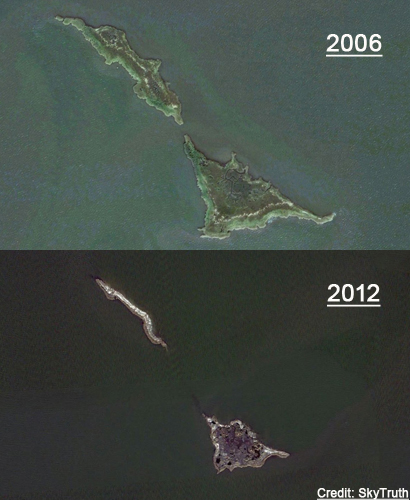 Satellite imagery reveals how this island in Barataria Bay, off Louisiana’s coast, is quickly eroding.

Isn’t BP supposed to pay for spilling oil into the Gulf?

Yes. The Clean Water Act sets the rule for such penalties. In 2012, Congress passed the RESTORE Act, which ordered that the majority of civil fines stemming from the oil spill be spent on Gulf Coast restoration efforts. Those funds will go a long way toward healing the delta and restoring the Gulf.

"It represents a significant step toward justice for the Gulf Coast ecosystems, economies and communities that were damaged by the disaster," said EDF president Fred Krupp.

Beyond that, BP is also liable for Natural Resources Damages Assessment fines and economic losses.

How will the money be used?

In Louisiana, it will help fund the projects in the Coastal Master Plan, which serves as the state’s guiding document for restoration, as well as other projects around the Gulf.

EDF helped shape the Louisiana plan, providing guidance on over 100 projects that will help the state recover its coastal land areas and protect its communities. Key to this is making sure "natural infrastructure" projects — wetlands, barrier islands and oyster reefs — all play their part, both by fortifying the coast and rebuilding habitat.

Along with our Restore the Mississippi River Delta partners, EDF is working on the ground in Louisiana and federally to ensure settlement dollars remain committed to large-scale, science-based restoration projects and that these projects are being implemented with urgency.

Already, restoration money is being used to help rebuild four Louisiana barrier islands that will buffer storm surge and provide vital habitat for birds, and to design two large-scale sediment diversions that will use the natural land-building power of the Mississippi River to rebuild tens of thousands of lost acres of wetlands and ecosystems.