How cap and trade works

Cap and trade reduces emissions, such as those from power plants, by setting a limit on pollution and creating a market.

The best climate policy — environmentally and economically — limits emissions and puts a price on them. Cap and trade is one way to do both.

It’s a system designed to reduce pollution in our atmosphere.

The cap on greenhouse gas emissions that drive global warming is a firm limit on pollution. The cap gets stricter over time.

The trade part is a market for companies to buy and sell allowances that let them emit only a certain amount, as supply and demand set the price. Trading gives companies a strong incentive to save money by cutting emissions in the most cost-effective ways.

The government sets the cap across a given industry, or ideally the whole economy. It also decides the penalties for violations.

Carbon dioxide and related pollutants that drive global warming are main targets of such caps. Other pollutants that contribute to < a href="https://www.edf.org/health/why-smog-standards-are-important-our-health">smog can also be capped.

In carbon dioxide's case, the heat-trapping greenhouse gas mixes into the upper atmosphere and has a global effect. Reducing emissions locally lowers levels around the world.

The total amount of the cap is split into allowances, each permitting a company to emit one ton of emissions. (You'd have to drive 2,400 miles, roughly the distance between New York and Las Vegas, to emit that much carbon dioxide.)

The government distributes the allowances to the companies, either for free or through an auction.

The cap typically declines over time, providing a growing incentive for industry and businesses to reduce their emissions more efficiently, while keeping production costs down.

Trading can lead to cuts in pollution sooner

Companies that cut their pollution faster can sell allowances to companies that pollute more, or "bank" them for future use.

This market — the "trade" part of cap and trade — gives companies flexibility. It increases the pool of available capital to make reductions, encourages companies to cut pollution faster and rewards innovation.

Cap and trade lets the market find the cheapest way to cut emissions.

Because there are only so many allowances available, total pollution drops as the cap falls.

As companies use established techniques to lower emissions, such as adopting energy-efficient technology, entrepreneurs see opportunity.

Ever wonder why you don't hear about acid rain anymore? Thank cap and trade, which slashed levels of sulfur dioxide to solve the problem — at a fraction of the projected cost. 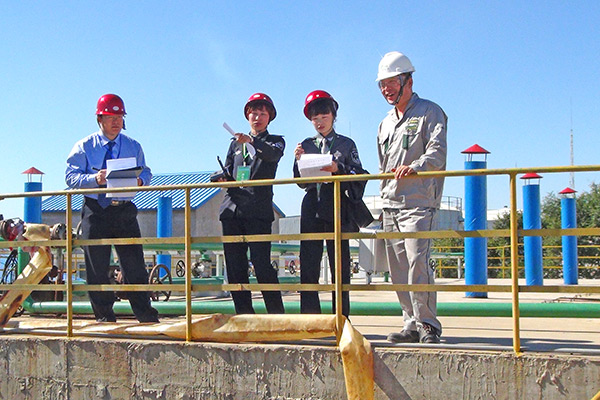 Environmental enforcement officials, trained by EDF, conduct an on-site inspection at a factory in China.

China, the world's largest greenhouse gas emitter, launched the initial phase of a national carbon market in 2017 with help from EDF.

The new emissions trading system is expected to be the world’s largest, dwarfing all existing programs, and is a central component of China’s strategy to tackle climate pollution.

The national program builds on pilot emissions trading systems, which have included elements of cap and trade and are already underway in seven cities and provinces in China.

They cover more than 2,600 companies in regions with a population of more than 258 million.

In the European Union's Emissions Trading System, capped emissions from stationary structures were 29% lower in 2018 than when the program started in 2005.

In the United States, California’s climate policies have led to a steady decline of the state's carbon dioxide pollution. The centerpiece is the cap-and-trade program, which EDF has helped design and implement.

California's emissions from sources subject to the cap declined 10% between the program’s launch in 2013 and 2018. Meanwhile, the state’s economy is thriving [PDF].

Cap and trade makes even deeper cuts possible when countries cooperate, such as the United States and Canada. California and Quebec connected their systems in 2014, building a strong market that shows great potential.