Doubling down on carbon pricing 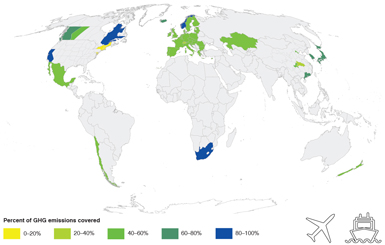 Today, roughly 12 percent of global greenhouse gas emissions are covered by an explicit carbon price—in the form of an emissions trading system or a carbon tax— that has already been implemented or is scheduled to be implemented. For more information on this map, download the full report, Doubling Down on Carbon Pricing [PDF].

The High-Level Carbon Pricing Panel convened by the World Bank Group and the International Monetary Fund has called for efforts to double the amount of global greenhouse gas emissions covered by carbon pricing mechanisms from current levels (about 12 percent) to 25 percent of global emissions by 2020, and double it again to 50 percent within the next decade.

In Doubling Down on Carbon Pricing [PDF], EDF and the International Emissions Trading Association (IETA) illustrate a number of possible routes for achieving the dramatic expansion of carbon pricing envisioned by the Panel.

The scenarios show that the Panel's goals are ambitious, in the sense that they will require action beyond what is currently anticipated — especially to reach the 50% goal. At the same time, the report finds that the goals are achievable, given the existence of multiple plausible scenarios to meet them.

Multiple scenarios could achieve a doubling of global emissions coverage between 2015 and 2020, all requiring carbon pricing adoption beyond what is currently implemented or scheduled to be implemented.

All our scenarios for Goal 1 assume currently existing carbon pricing programs are maintained; China implements a national Emissions Trading System (ETS), covering CO2 emissions from the power sector and select other sectors (as proposed by the country's National Development and Reform Commission); and CO2 emissions from international civil aviation are covered under the global market based measure (MBM) currently under consideration by the International Civil Aviation Organization.

Click on the maps below for more information on Goal 1 scenarios:

Scenario A.1Expanded coverage in the U.S. and Canada

Scenario A.3China extends its coverage to include industrial sectors

Achieving another doubling of global emissions covered by carbon pricing mechanisms would require much more ambitious action beyond the 2020 goal. Again, there are multiple possible pathways that could reach this goal.

All our Goal 2 scenarios assume major emitting countries that have some form of carbon pricing policies today extend their coverage to include all energy-related and industrial CO2, CH4, and N2O emissions (this includes China, the EU, the U.S., Canada, Mexico, South Korea, Japan, and South Africa); other existing carbon pricing policies are maintained; and all CO2 emissions from international civil aviation as well as from marine bunkers are covered by a carbon price.

Click on the maps below for more information on Goal 2 scenarios: