The outpouring of support after hurricanes Harvey and Irma showed us, once again, that America is at its best when we rally behind our common values and help others in need.

Remarkably, those terrible disasters seem to have even knocked an uncommon dose of common sense into Congress. Lawmakers had been on the verge of passing sharp cuts to the federal disaster relief agency to fund President Trump’s border wall, but reversed course faster than you can say “whiplash.” They quickly passed a $15 billion aid bill for Harvey instead.

What Congress isn’t doing is to take the next step and look at how disaster trends have changed, and ask why they’re costing taxpayers ever-more money – so we did it instead.

The results of our analysis should add to Harvey’s and Irma’s collective wake-up call for policymakers who rush to respond to every disaster, but plan for none.

A fourfold jump in disasters since the 1970s

After examining the Federal Emergency Management Agency’s disaster declaration records from the past 40 years, we found that four times as many counties were hit by disaster-scale hurricanes, storms and floods between 1997 and 2016, than during the two decades before that. 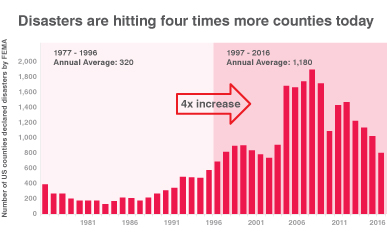 This jump is even more profound when you look at coastal storms: The number of counties that declared disasters increased by nearly a factor of 10.

Harvey and Irma have exceptional price tags due to their destructive rains, winds and reach – Harvey will likely be the nation’s costliest disaster with an estimated $200-billion price tag – but disaster relief for federal, state and local agencies has been on the rise for some time.

Between 2004 and 2013, FEMA spent more than $95 billion from the Disaster Relief Fund to help states and local communities cope after disaster struck. There were 32 percent more presidentially declared major disasters during this period than during the preceding 10 fiscal years, according to the General Accounting Office.

The number of disasters exceeding 1 billion dollars in damages, meanwhile, has doubled in the past five years, NOAA reports.

At the same time, the geographic reach of such events has exploded. During the past 20 years, 1,180 countries on average were affected annually – up from 320 countries during the two decades before that.

Will Congress take the lead?

The question now is whether Congress is ready to take responsibility and help our communities prepare for future storms. Such planning must come on four fronts:

In the end, disaster relief and planning aren’t sufficient by themselves. Today, Congress sits idly by as the Trump administration sweeps aside programs to reduce greenhouse gas pollution.

Until we resolve to act on climate change, we will continue to set the stage for the next Sandy, Harvey, Irma, Matthew or river flood. It’s not a question of whether we know enough to act, but whether we care enough to put problem-solving ahead of politics-as-usual.

These EPA programs are key to hurricane relief efforts. Now Congress wants to cut them?

Thanks for this. Appreciate the evidence-based analysis. Pity that the Trump team isn't interested in any evidence that goes against dogma. The Excel numbers are especially interesting.

So concisely presented! Thank you. Addressing the issue of climate change and disaster prevention is in the same arena as healthcare: We all need it and both issues must take precedence over politics and greed. We need EPA to be funded adequately and managed well, not politically. And we need health care/Medicare for all. Keep the evidence-based info coming!