What we can learn from 1,000 years of Dutch flood management

I looked out the window at the North Sea as my flight began its descent toward Amsterdam. Two things struck me immediately: First, the sheer number of container vessels approaching and leaving the Port of Rotterdam.

Second, the deep fields of undeveloped dunes protecting the coastline. Dunes provide flood protection for 50 percent of the Dutch coast – including one of the busiest ports in the world.

I had already learned something before my plane touched ground. I then spent the next 10 days in the Netherlands, meeting with water districts, academic institutions, research foundations and staff at the Rijkswaterstaat – the Netherlands equivalent of the United States Army Corps of Engineers.

I was looking for lessons to take back to our work on natural infrastructure and the restoration of the vanishing Mississippi River Delta.

One-half of the Netherlands is flood-prone and about one-quarter is below sea level. And yet, more than 16 million people live well in an area the size of Connecticut, and with a per capita Gross Domestic Product similar to that of the United States.

What’s more, the Netherlands is second only to the United States in agricultural exports.

Water management is in the DNA of the Netherlands. We can learn from the Dutch experience and expertise how to live well with water.

Katrina and Sandy showed we must do better

After seeing the destruction caused by Hurricane Katrina 10 years ago, and more recently by Super Storm Sandy, we know we can do a better job reducing risks to people and the economy.

Like the Dutch, we also know we can do more to improve the resiliency of coastal habitats that provide important ecosystem services: risk reduction, shell fish and fisheries production, water quality improvement, recreation.

The Netherlands doesn’t fool around with floods. After a devastating North Sea flood in the 1953 resulted in 1,800 deaths, the nation adopted a “never again” attitude. 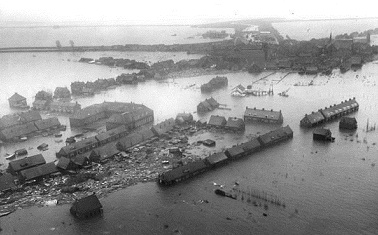 Today, a national system of dikes and surge barriers provide a level of protection unheard of in the U.S. – protection against an event with a probability of occurring once every 10,000 years. That’s not a typo.

By comparison, New Orleans’ upgraded system of protective levees and surge barriers is supposed to guard against storm events likely to happen every 500 years.

The Netherlands’ landscape and economy is built on 1,100 years of water engineering. Canals draining, collecting and moving water around are everywhere – 18 percent of the nation today is considered water.

Management of the water in these canals, together with large dikes, maintain the omnipresent system of polders – small units of low-lying land reclaimed from the sea and rivers that exist below the natural water table. There is little evidence of the original delta from which the Netherlands grew and it’s hard to see the North Sea unless you are standing atop a flood control structure.

But where there aren’t high dikes walling off the North Sea, you will find lovely expanses of protected and restored vegetated dunes, natural infrastructure that provide protection for communities, habitat for birds and are valued for their contributions to ensuring a high quality, reliable water supply.

These ecosystems are providing multiple ecological and economic benefits. 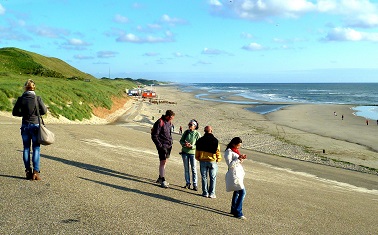 In areas vulnerable to sea level rise and storm surges, the U.S. can learn from the Dutch.

We can create communities on systems of canals. We can build infrastructure to protect critical economic assets and large, densely populated areas from storm surges. And we can enhance and protect our nature defenses – barrier islands, dunes and wetlands – to better withstand storms.

It takes collaboration, willpower, resources and time. And like the Dutch, we’d be better off if we made the investment.

Nice article. I was impressed with the system of canals and dikes in The Netherlands. But I had no idea of the level of protection (probability of 1 in 10,000 years).

We watched the 60 minutes episode that covered this topic with the lead Dutch gentlemen explaining how the Dutch have taken control of their flooding issues. It would be very wise for our Army Corps of Engineers to entertain this man, and ask the Dutch for a plan that will preserve our own coastlines.

All of their efforts that have turned areas into a flood control zone/measure are functional. The underground parking idea was a masterful idea, while creating a natural looking dune at the same time, there were other great ideas, but this one sticks out to me the most. As I go back and think about this interview, I am fairly sure there will be an attempt to create a Dutch flood control zone along the coast of New Jersey in the very near future, and may this be the first of many…

I would like to learn more about flood water control. I am looking for manufactures of screw pumpes that can pump in excess of 100,000 GPM for flood control in Houston. We would also need to flood gate control backflow of water.

Now a Dutch icon, windmills were used for centuries to drain land and manage water in the Netherlands.
Frank Kehren