How a few Americans saved our national bird from DDT

The death of a 38-year-old bald eagle, the nation’s oldest, on a New York road made national headlines last year. The attention showed just how far we’ve come in our protection and concern for the magnificent – and once endangered – bird.

A national symbol since 1782, the bald eagle was on the brink of extinction just a few decades back. In 1963, there were only 487 nesting pairs left in United States, down from at least 100,000 when the first settlers reached North America.

An estimated 5,000 pairs of eagles are living in the lower 48 states today. The bird’s recovery is a success story, made possible by tireless Americans who fought to save the iconic animal against its worst enemy yet: a nasty pesticide known as DDT.

Hunting and habitat loss had already made a dent in the bird population by the time DDT hit the market to boost agricultural output and tackle malaria after World War II.

It was initially a very effective pesticide that earned its inventor a Nobel Prize – so effective, in fact, that it also began to eradicate birds high up in the food chain and affect human health. 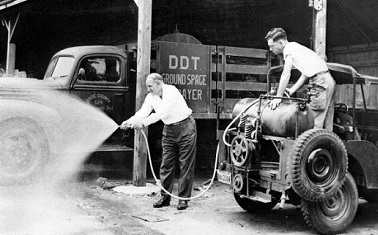 A war against DDT

“We knew DDT was damaging the eggshells of birds, preventing chicks and eaglets from hatching,” recalled Art Cooley, who co-founded Environmental Defense Fund with Charlie Wurster and Dennis Puleston in 1967 to halt the devastating effects DDT was having on wildlife and especially birds.

Their ground-breaking efforts were chronicled in 2015 year in Wurster’s book DDT Wars.

“We took Suffolk County to court and won an injunction against the use of DDT,” Cooley said. “After that victory, we pursued the case state-by-state until we ultimately won a nationwide ban in 1972.”

Get a copy of “DDT Wars”

The ban came 10 years after Rachel Carson first warned of DDT in her epic best-seller Silent Spring. And it would take another quarter century for the bird to finally be removed from the federal list of threatened and endangered species.

But we did it. We saved the eagle and we’ve seen other birds almost killed off by DDT come soaring back, too. Peregrine falcons, osprey, pelicans, falcons, hawks – all predatory and fish-eating fish vulnerable to the pesticide – are recovering.

So let’s celebrate unshakable Americans such as Cooley, Wurster and Puleston who don’t take no for an answer as they work to make this a better country for all living things. It’s a cause worth fighting for.

And thank you to all the volunteers who spent long days in hack towers, feeding, observing, and recording every detail of reintroduced young bald eagles.

Norm Spring was in the vanguard to ban DDT. He was honored with the Michigan Environmental Hall of Fame 2014. He started in Grand Haven, Michigan, and after three years of going to the city council, he succeeded in getting it stopped here. Then he with others formed the Michigan Pesticides Council that met at Michigan State University and succeeded in banning DDT and like pesticides in Michigan. Inspired by this work, I wrote The Dynamic Great Lakes to show that the democratic process sometimes can work.

Yes, ultimately banning DDT took the work of very dedicated volunteers and activists across the United States. They are all heroes!