Why you only get 25% of the electricity you pay for

By Ronny SandovalFollow
Ronny is EDF's Director of Grid Modernization.
Published May 27, 2014 in Energy

What would you say if I told you that about three-quarters of what you spend on electricity every month is wasted? Considering that Americans spend about $350 billion on electricity annually, I hope you’ll find this as shocking as I do.

From generation to delivery to consumption, inefficiencies at every step of electricity’s journey add up to a lot of waste. Fortunately, these same conditions present us with opportunities to substantially reduce inefficiencies and their associated economic, social, and environmental impacts.

Generation: Energy is wasted at the source

There are limits to what can be done to address this problem as this loss is largely due to the thermal process of large power plants, since heat is a by-product of this sort of generation and it has to be released somehow.

Some plants, however, achieve higher efficiencies by capturing wasted heat energy and putting it to meaningful work, raising the total efficiency to somewhere within the 60-80 percent (or greater) range.

One example of this kind of technology is combined heat and power, which burns a fossil-fuel like natural gas to make electricity, but reroutes the heat generated as a by-product (often vented out of the chimney stack) back to the customer’s premise and used to heat hot water or a space.

Today, this technology is mostly limited to large buildings or complexes, but it has proven to be very successful in places such as New York City, where these types of structures are prevalent.

Delivery: Energy is lost en route to homes and businesses

Adding to our energy loss, another seven percent of the electricity that’s ultimately generated is later lost in the delivery path to homes and businesses.

Available and emerging technologies show us it doesn’t have to be this way. “Voltage optimization’ ” technologies and strategies, for example, can lower the amount of energy lost in the delivery process while also reducing the associated environmental impacts.

Try to think of all the old and inefficient appliances and equipment that use more electricity than is necessary. For example, incandescent (traditional) light bulbs can use four times as much electricity as energy-efficient compact fluorescent bulbs. Most of the energy these traditional bulbs use generates heat, not light. 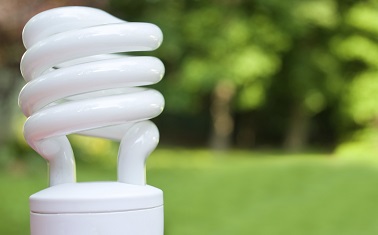 Similarly, inefficient refrigerators can use 15 percent more electricity (or much more depending on the age) than efficient alternatives.

Now, also think of all the things that are simply left on or running that don’t have to be (lights, computers, TVs, phone chargers, etc.) and you really start to get a picture of the amount of inefficiency based on our ingrained habits of consumption.

But don’t be discouraged! Abundant and cost-effective energy efficiency opportunities mean we can reduce this waste - and ultimately pollution. By simply improving the way we use energy at home and at work we can realize big energy savings across the whole electricity supply chain.

When an unused appliance is powered off, the electric system doesn’t just save on the energy the appliance would have used, it also avoids all the extra energy (and greenhouse gas emissions) the system would have generated to compensate for its inefficiencies.

Fortunately, more and more solutions (such as “smart’ thermostats” and “smart” power strips) are providing consumers with the tools to automate and maximize energy savings at home.

Commercial buildings can also benefit from these intelligent energy control devices by implementing operating schedules, occupancy sensors, and other forms of building automation to ensure that lighting or heating and cooling systems aren’t running when not needed.

Abundant and cost-effective energy efficiency opportunities mean we can reduce this waste.

Collectively, we can improve this part of the supply chain through an increasing variety of actions - such as using more efficient appliances, energy conservation, and the automation of energy use.

I think it’s safe to say that most Americans would like to see more bang for their electricity buck, but the argument for efficiency is not just a financial one. Energy efficiency has the added benefit of protecting our finite natural resources and reducing harmful, greenhouse gas emissions that affect our health.

Much of the inefficiencies in the electric system are a product of decisions made along the supply chain and the policies and incentives that drive them.

The U.S. is expected to spend about $2 trillion over the next two decades to replace our aging, inefficient and polluting energy infrastructure. This presents a once-in-a-generation opportunity to revolutionize how we make, move, manage, and use electricity.

It’s an opportunity we cannot afford to waste, the way we’ve been wasting so much electricity.

Nice article until you had to bring environmentalism into it.

The actual thing you want to be concerned about is recycling electricity. I was hearing in high-school science classes about experimenting using superconductors to allow energy to keep cycling.

Instead, superconductors aren't even mentioned, and it emphasizes how it's up to the customer, not the engineer, to apply energy savings. Preaching to us about our bad habits. How about YOU improve the system?