A river reunited: When The Colorado River reached the sea

By Jennifer Pitt
Jennifer Pitt, based in Boulder, CO, is the Colorado River program director at Environmental Defense Fund.
Published May 15, 2014 in Ecosystems

Around May 16, the Colorado River was reunited with the sea – a destination it hadn’t seen in many years – thanks to “pulse flow.”

Scientists had been monitoring the flow that week to pin down when the waters would meet, some time during high tide, but acknowledged the river could have reached the sea as much as a week earlier, based on testimony from a handful of adventurers who had ridden their stand-up paddle boards to the tidal interface.

The uncertainty may seem surprising, but those familiar with the delta know that the landscape can be difficult to navigate, making water hard to track.

The river’s location as it crosses over the last few miles of sand on its approach to the land’s edge is ambiguous. The delta is a sprawling plain of sandy channels that have shifted so many times they seem to go everywhere.

It’s not easy to follow the water flowing through this terrain, even with hundreds of eyes trained on it during this unprecedented event.

The uncertainty brings to mind the words of Aldo Leopold, one of the fathers of the American conservation movement who visited the Colorado River Delta in 1922. He wrote, “The river is nowhere and everywhere, for he could not decide which of a hundred green lagoons offered the most pleasant and least speedy path to the Gulf.” 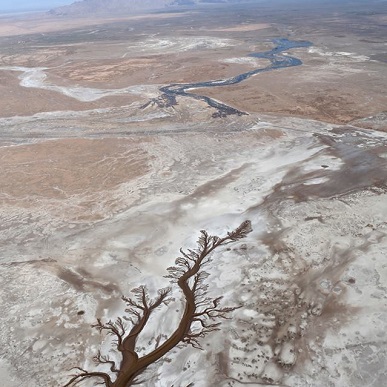 The Colorado River reuniting with the sea.

When the United States and Mexico began releasing water into the Colorado’s delta on March 23, no one knew how far the flows would progress downstream.

The engineered pulse flow was designed to deliver approximately 105,000 acre-feet of water – about 0.7 percent of the Colorado River’s average flow – for the purpose of restoring habitat along the river’s banks. The best sites for re-creating nature were thought to be in the upper half of the delta, and the water’s journey in the lower half was not a primary focus of the design effort.

Yet some of the pressing questions since then had been where is the water? And has it reached the sea?

As the pulse flow advanced down the delta, there had been an unexpected surge of interest in its actual location. As Philip Fradkin described in A River No More, back in 1981, the failure of the Colorado to flow all the way to the Gulf fundamentally altered our perception of the river.

It felt unnatural, it made us uneasy. The prospect of the river completing its journey and reconnecting with the ocean signaled that, if only briefly, a fundamental disruption in the nature of things had been made whole again.

The value of the Colorado River Delta pulse flow is a story that will unfold over the next few years, as scientists collect data and tell us where the water went.

How much went into the underlying aquifer, and how much into the plants’ roots? And how did nature respond? How many new trees? What about the birds? They might be able to tell us whether the pulse flow’s meeting with the sea had unexpected benefits.

Did it have measurable impacts? Were new wetlands created? Did fisheries increase?

But there is more to this story: There is value in seeing the river flow again, where it had been missing for so long.

We heard it in the words of the officials who stood on Morelos Dam, when the gates were opened to allow the water to pass through, as they celebrated the river’s return to the delta. And we see it in the global interest that piqued as the river returned to the sea.

The pulse flow is ephemeral by design – a simulated spring flood that triggers new growth and then recedes – but now that we’ve witnessed the Colorado flowing in its delta, we know that it is possible to conjure the river back to life where the world thought it was dead.

It’s a resurrection that we won’t soon forget, and a vision of what could be in the future.

Excellent contribution. It is essential to maintain natural wetlands. It is our duty to force our governments commitment to this cause

Just curious if the Colorado River Delta pulse was a one-time experiment or if there are plans to do this every spring to revitalize the Delta's ecosystem?

Hi Ken! This is a one-time pulse flow that will be used to collect data to inform future U.S.-Mexico delta negotiations. The hope is that we will receive strong results and positive feedback that will encourage the two nations to sign a Minute 319 successor agreement. It would commit to more long-term delta restoration, with more flows.

What a wonderful thing to do..finally. Let's follow this groundbreaking agreement and document how it improves the habitat and peoples' lives.