Skip to main content
Unlock your $3‑for‑$1 match. Donate now

December 22 marked 25 years since rubber tapper and environmental leader Chico Mendes was assassinated in his home in Xapuri, Acre in the Brazilian Amazon.

I had met Chico three years before, and on repeated trips to Acre and Xapuri learned from him about the lives of the rubber tappers – workers who collect latex from cuts they make in the trunks of rubber trees – and their struggle to save the forest and their livelihoods from ranchers’ hired guns and chainsaws. It totally changed how I thought about environmentalism and tropical forests.

I organized his two trips to the United States, in 1987 and 1988, set up meetings and interviews, translated for him and generally did whatever I could think of to get the media, policy makers, environmentalists and the public to understand that Chico Mendes’ story and ideas held the key to the future of the biggest remaining rainforest in the world.

No one at the time imagined how profound and far-reaching the consequences of Chico’s life and death would prove to be – but we were friends and I still miss him. 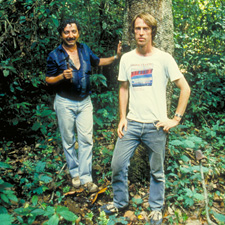 Chico Mendes and me in the late 1980s at the Nazare rubber estate (in Xapuri, Acre), where we were accompanying American journalists doing a story on the Amazon. Photo credit: J.B. Forbes

Chico led rubber tappers in stopping ranchers from cutting down the forest from which local communities lived, as well as resisting and denouncing hired gunmen who threatened leaders of the rubber tappers’ union and drove families from their homes.

After I met Chico in 1985, he worked with EDF and other environmental groups and researchers to hold up and reformulate an internationally financed road-paving project that he feared would exacerbate deforestation and conflicts, and to develop the concept of “extractive reserves” – protected forest areas where government would secure local communities’ land rights, provide health care, education, and invest in sustainable alternatives for generating income.

He was killed by a rancher after stopping him from clearing forest where he and the local community wanted government to create one of the first extractive reserves.

Chico at times sounded hyper-idealistic, but he was politically brilliant.

On learning what scientists and environmental organizations were saying about tropical forests – that they were central to creating the rain that agriculture depends on, stabilized the global climate, and that their destruction was causing the extinction of more plants and animals than at any time in the last 60 million years – he was immediately able to see the global implications of the rubber tappers’ local struggle, and the potential for the local struggle of the global environmental movement. He formulated a vision that brought together unlikely allies for transformative change.

Social activists and environmentalists have both claimed Chico, and sometimes have acted as if he could only have been one of those things. They are wrong.

Chico told an interviewer shortly before he was killed:

He told the same interviewer:

We realized that to guarantee the future of the Amazon, we had to find a way to preserve the forest while at the same time developing the region’s economy… we knew it was important to stop the deforestation that is threatening the Amazon and all human life on the planet… So we came up with the idea of the extractive reserve. (p.41)

Chico died, but his vision for transformative change won anyway.

Before Chico, people in Brazil, if they thought about it at all, thought that slashing and burning the Amazon forest was the price of progress. Today, not even the head of the agribusiness caucus of the Brazilian Congress – who fought very hard to relax legal restrictions on forest clearing – will say that Brazil needs to cut down more forest to grow, and the overwhelming majority thinks that deforestation has to stop.

Chico would be heartened by the good news about Amazonian deforestation. It is down, about 75% below the 1996–2005 average, in large part because of the policies designed and put into practice by Chico’s close friend and colleague, former Environment Minister Marina Silva. Agricultural production is up over the same period.

Because of this, Brazil is the world leader in reducing greenhouse gas emissions, at over three billion tons of carbon. Creating more extractive reserves and other protected areas, and recognizing indigenous territories was central to the plan.

In Acre, Chico’s colleagues, politically marginal during his lifetime, came to power ten years after his death. They have stayed in power ever since, and made the state a sustainable development leader in the Amazon and the world, reducing deforestation, increasing GDP, agricultural production and greatly improving healthcare and education for the population.

Just last November, the United Nations Framework Convention on Climate Change approved rules for countries and states that reduce their deforestation below historical levels to sell those emissions reductions in carbon markets or to public sector donors.

The fight for the forest in the Amazon, and elsewhere, is far from over, and there has been huge pushback against environmental law enforcement, forest protection and indigenous land rights.

Chico believed that out of conflict and struggle could come transformative change, and so it has, even if not just as he thought. We should believe it too, and keep Chico’s vision and ideas alive.