How does your pet angelfish affect coral reefs?

By Rod FujitaFollow
Rod is the Director of Research and Development for EDF's Oceans program.
Published July 11, 2013 in Oceans 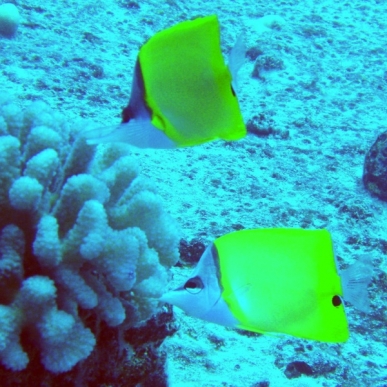 When we think of fisheries, we generally think of seafood. But there is another, very large, fishery that has not made it into the headlines. No international agencies are monitoring it. Yet millions of people benefit from it, both financially and aesthetically, even as it probably is having a strong impact on coral reefs, the centers of the ocean’s biodiversity.

It’s the ornamental fishery, which harvests fish and invertebrates for display in aquariums and as curiosities.

Ornamental fisheries have an impact on coral reefs

In our new paper on ornamental fisheries, we note that the impacts of these fisheries are not well understood, but they may be very large. The ornamental trade is focused on coral reefs, home to much of the world’s marine biodiversity, and involves at least 45 source countries. Every year, this fishery removes an estimated 20 to 24 million fish, many millions of corals and shells, and 9 to 10 million additional invertebrates.

Coral reefs are extremely productive and teem with colorful life. But they also use up a lot of energy, and there is a lot of competition and predation going on in reefs, resulting in relatively low net production. In contrast to cold, nutrient rich waters that can support very high fishery yields, the warm, nutrient-poor waters typical of coral reefs are probably unable to sustain large harvests.

So what to do?

We know that unassessed fisheries tend to be unmanaged fisheries that decline and collapse. So the first step toward a solution is to assess the status of ornamental stocks and the coral reefs that support them.

In our paper, we lay out a step-by-step approach for assessing and managing fisheries for which data are limited, and illustrate the methods using data from Indonesian fisheries.

First, the status of the whole coral reef is assessed – not just the fish stocks – and conservation targets aimed at maintaining or restoring healthy reefs are set.

Next, the vulnerability of the stocks and their degree of depletion are estimated. This information is combined in a decision matrix: for each category of vulnerability and depletion, a different set of management measures are implemented. For example, for a highly vulnerable species that is also highly depleted, a ban on fishing may be appropriate. For more resilient species that are less depleted, harvest might be increased to allow depleted stocks to recover.

The decision matrix can also be used to prioritize stocks for more detailed assessment, resulting in catch limits for the high priority stocks.

We hope that this new analytical framework and management system will catch on before the ornamental fishery starts to generate headlines about a new fishery crisis.

Sometimes I wonder why there are people who keep destroying the coral reefs when there are numerous as well trying to preserve them. Great post.. I learned so much from this. Keep posting.

Unfortunately, EDF is not the most reliable source for fishery information. Take this story. A domestic Silver Angelfish is pictured in a story about coral reefs in our oceans. These fish are FRESH WATER fish, and a domesticated strain at that. Additionally, in the US, where this article is most likely targeting and soliciting financial consideration, the SALTWATER and FRESHWATER ornamental fish market is almost completely a result of a viable Aquaculture trade. Wild caught fish in the US, particularly ornamental's are highly regulated, and almost exclusively reserved for take by educational organizations, only after permitting approval by NOAA. EDF is either unable to determine such basics as common fish identification and facts, or deliberately using such to elicit an emotional response in what they consider an uneducated audience.

In reply to Sometimes I wonder why there by williamcase3

Thank you for the correction - you are right, that IS a silver angelfish. And you are also right that most U.S. fisheries are highly regulated. But the major point of our publication and this post is that the trade from developing countries is not as a rule well regulated.

Our paper offers a way for these countries to scientifically assess their stocks so that the playing field will be more level, and the risks posed by harvesting millions of fish from coral reefs is reduced. I wouldn't call this an emotional appeal - thousands of fish stocks have crashed around the world due to lack of assessment and management, especially in the developing tropics.

The U.S. is way out in front in this area - about half our commercial stocks are assessed, all are managed in some way, overfishing has been dramatically reduced, and overfished stocks are in rebuilding plans.

One last thing - it's fine for you to criticize me and my writing but please refrain from casting aspersions on my readers - they, and the editors of the peer reviewed journals that publish my work - are hardly uneducated and certainly don't need or want emotional appeals.

In reply to Unfortunately, EDF is not the by Henry

Currently coral reefs are the last bastion of marine life that exists under water, unfortunately is losing, we must be aware of this.

I don´t understand why there are people who keep destroying the coral reefs.

Wow! Such an interesting post i never heard about it before..Thanks Rod Fujita for a brilliant guide.

Thanks to our astute readers for pointing out that the editors inadvertently chose a freshwater fish to illustrate this post. The longnose butterfly fish that now appear above are more appropriate. And good looking fish.

Great, I can only agree with you guys! I am glad I went trough all the threads here. They give so much information which I am looking for in every post. Thanks a lot for sharing this.