A surprising connection between pollution and violent crime

By Keith GabyFollow
Keith is an Associate Vice President of communications at EDF.
Published July 10, 2013 in Health 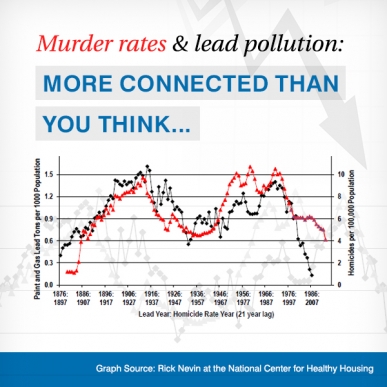 This may be the most startling good news you will hear in a while: Estimates suggest that this year the murder rate in the United States may sink to its lowest level in over 100 years. And there’s a good case to be made that the environmental movement is partly responsible.

Before I explain the environmental angle, stop and think about the statistic itself. Rick Nevin at the National Center for Healthy Housing recently wrote that based on crime data from major cities, the U.S. is on track for the lowest murder rate since the very early 1900’s. People at almost every point in history believe their society is in decline – or at least that morals and manners are slipping –   but the big picture is dramatically improving. Our society, while hardly tranquil or free from violence, is less violent than at any time since our great grandparents were in their prime.

But why is the murder rate falling?

There is a strong case to be made that much of the decline is related to removing lead from the environment. As Nevin explains, there were two major spikes in the murder rate in the last century – around the 1930’s and the 1960’s to 1970’s. Shown on a timeline graph, these spikes appear as two big bumps, like a Bactrian camel. Significantly, the graph for lead exposure in our environment looks almost exactly the same, with a 21 year off-set. That is, peak lead exposure resulted in a spike in the murder rate 21 years later.

Nevins explains the ups and downs of lead exposure in the United States:

“Lead paint use surged in the late-1800’s, when heavily-leaded paint deteriorated by “chalking”, causing severe lead dust hazards. The leaded share of USA pigments fell from near 100% in 1900 to 35% by the 1930’s, but the USA didn’t ban lead paint until 1978. From 1935 to the mid-1980’s, average USA preschool lead exposure tracked trends in per capita use of lead in gas, as air lead fallout contaminated dust while lead paint exposure changed very slowly with changes in the housing stock.”

Now, you can graph lots of correlations using historical data. The sales of Beatles records matches well with deaths of American soldiers in Southeast Asia, for example, but that doesn’t mean one caused the other. But there are two strong indications that lead and crime are related.

First, it happened twice. The fact that both rates rose and fell, then rose and fell again, in sync, makes a coincidence more unlikely. Second, there has been significant medical and scientific investigation into the effect of lead on the brain, and it is more than plausible that exposure to this toxic substance in early youth could lead to violent behavior.

Nevins also explains the most recent drop in the murder rate, after a period of stability:

“There was little change in the USA murder rate from 2000-2008, in part because there was relatively little progress in reducing lead dust from lead paint for years after the phase-out of leaded gasoline was largely completed in the mid-1980’s. That changed with the passage of the Residential Lead Hazard Reduction Act of 1992 and, 21 years later, the murder rate is now falling rapidly.”

The environmental movement has been working to reduce lead in the environment for a long time. EDF and other groups helped convince Congress and federal regulators to end the use of lead in gasoline. Environmentalists also pushed to get the lead out of paint to protect children’s developing brains. It was especially a problem in poor neighborhoods where old, chipping paint led to more exposure for kids.

We should, of course, be cautious about assigning all the credit for a social phenomenon to one cause. The real heroes in the fight against crime are the cops and members of the legal and social services systems who make profound sacrifices in the line of duty. But the plummeting murder rate nonetheless is a reminder that environmental regulations are not just nice ideas; they also have a real impact on the health of American families and, perhaps, on the state of our society. Laws and rules that limit pollution make a big difference in the lives of everyday people. Keep that in mind next time someone tells you about the “cost” of environmental regulation.

Interesting but I confess that I'm sceptical about the underlying link...

Personally I find it difficult that relationship between crime and global warming.

Sorry for my bad English

The article is not suggesting that global warming is the lowering murder rates. It's suggesting that lead (which has a profound effect on the brain) is potentially a link to the increase in crime during two distinctly high periods of murder.

In reply to Personally I find it by ebooker

I don´t understand the reason, but can be...

A far better graph, IMO, is shown at the following web site:

The correlation between gun violence versus gun control and other legislation that empowers the criminals and weakens citizen's rights to self-defense is unmistakable. That legislation I am referring to is such that it creates a black market where organized crime flourishes (Prohibition, ever tighter drug control laws, etc.).

The rise and fall of violent crime during the second half of the 20th century and ... pattern is the same: violent crime peaks around 20 years after lead pollution peaks.