The Arctic is melting and the fish are moving in

By Rod FujitaFollow
Rod is the Director of Research and Development for EDF's Oceans program.
Published April 4, 2013 in OceansScience 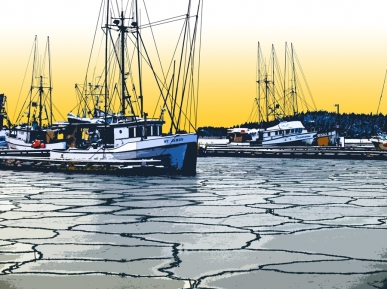 In 2012, ice cover in the Arctic Ocean reached the lowest level ever recorded by satellites over the last 30 years, according to NASA. As a result, the Arctic Ocean has expanded much more rapidly than climate models had projected.  (In the image below, the yellow line shows the average minimum extent of the ice over the past 30 years, compared to 2012.) 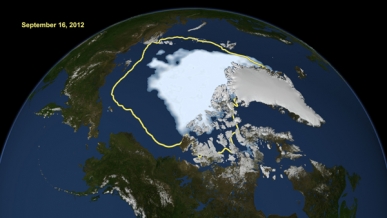 The warming waters and expanding ocean seems to be attracting some species of fish, and of course less ice means more opportunity for fishing.

In the past, when new patches of fish were discovered, they have been rapidly exploited, and sometimes overexploited.  But in one of the most progressive fishery management moves ever, the North Pacific Fishery Management Council imposed a moratorium on commercial fishing in a 200,000 square mile zone within the expanding Arctic until sufficient information is available to develop a sound scientific basis for harvest.

A new study suggests that the Arctic will become less productive for several reasons.

These are all reasonable concerns, but there may be mitigating factors that could increase the productivity of the Arctic in a warmer world.

For example, deep water will be an obstacle to some species, but not necessarily to all, including some very important commercial species that live mid-way in the water column. Acidification will most likely harm some species in the Arctic food web, but they could be replaced by other species less affected by acidification.

The bottom line is that nobody can be too sure of what will happen to fish in the Arctic and Arctic Ocean productivity, but we can be pretty sure that if commercially important stocks do move into the expanded waters there, fishing fleets will follow.

The moratorium on commercial fishing imposed by the NPFMC is the right policy response to large scientific uncertainty.  Hopefully, other nations will follow suit and adopt similar precautionary measures to prevent a rapid increase in fishing pressure before science can catch up.

Dr. Fujita's statement on the need for caution in expanding fisheries into the Arctic Ocean in the wake of decreasing ice cover is correct. We definitely need information on stock sizes and their productivity to guide us in the development of sustainable fisheries in the Arctic oceans.

While caution is appropriate, lack of information should not be used as a surrogate for a perpetual moratorium on fisheries in Arctic waters. I would argue that the step-wise development of fisheries in a cooperative manner with resource scientists can provide valuable information on the availability and abundance of commercial fish stocks which can lead to the full development of sustainable fisheries.

From an international policy standpoint preventing appropriate utilization of arctic fish stocks, or any fish stocks for that matter, for an expanding world population in need of additional protein supplies is eqally as aggregious as permitting uncontolled exploitation and overfishing.

This is an excellent point. I agree - lack of information should not serve as a surrogate for a perpetual ban on fishing. As the science improves, uncertainty will be reduced and sustainable catch should become possible. It is indeed imperative that we increase fishery yields to feed the world. Unfortunately, we have not been doing a very good job of this -- global fishery yields seem to have topped out several years ago (although that in itself is quite uncertain, given reporting problems and illegal fishing throughout the world). Lack of information has definitely not impeded the development of fisheries, resulting in rapid depletion of vulnerable stocks and yields that are far below their potential - with attendant adverse impacts on food security and economic development. Whether we are talking about new fisheries in the Arctic, or fisheries that have been exploited (or over-exploited) for decades, we need fishery management that works -- in addition to more science.

In reply to Dr. Fujita's statement on the by Dr. Wally Pereyra