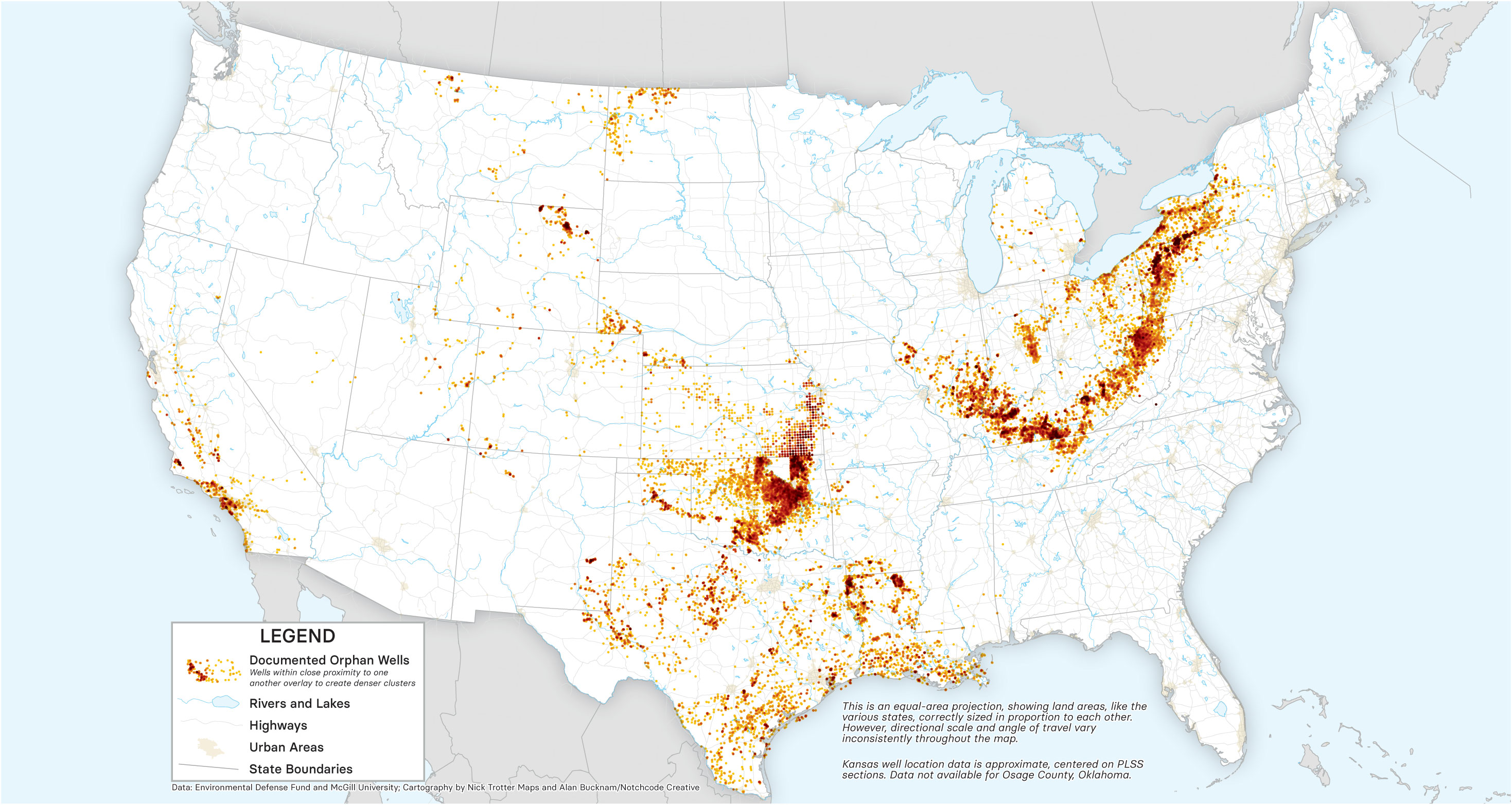 This is a map of 81,000 documented orphan oil and gas wells whose proposed federally funded closure would protect the environment, climate and communities while creating jobs.

Orphan wells and their dangerous impact

While oil and gas operators usually seal wells at the end of their productive lives, one hundred seventy years of oil and gas development has nonetheless left scores of so-called “orphan” wells across the United States—oil and gas wells that are inactive, unplugged, and have no solvent owner of record. They pose significant risks to human and environmental health by leaking toxic chemicals to the air, contaminating groundwater and emitting methane, the powerful greenhouse gas. And the states, federal agencies and Native American tribes responsible for their plugging and remediation often don’t have the funding needed to safely and effectively clean them up.

A plan to plug the wells

A nationwide plan to plug orphan wells will create tens of thousands of jobs and protect communities from air, climate and water pollution. That’s why EDF worked on the REGROW Act, a bipartisan bill led by Sens. Ben Ray Luján of New Mexico and Kevin Cramer of North Dakota, which funds a plan to plug every documented orphan well in the United States and lays the groundwork to reduce the number of unplugged orphan wells going forward.

To better understand the distribution of documented orphan wells eligible for closure funding under the REGROW Act, EDF partnered with researchers at McGill University to develop, using state-provided data, a first-of-its-kind geolocated dataset of such wells for every state that has them. Our research turned up approximately 81,000 wells across 28 states—numbers largely consistent with what states are reporting to the Interstate Oil and Gas Compact Commission (IOGCC). EDF has also calculated that approximately 9 million Americans live within a mile of a documented orphan well.

This count is a snapshot in time—as of summer 2021, many states are modernizing their databases and confirming the location and legal status of suspected orphan wells. But while numbers may fluctuate over the coming months, this map is a fair portrayal of the location and density of documented orphan wells around the country, with especially dense swaths in Appalachia, the industrial Midwest, the Southern plains into the western Gulf Coast and urban Southern California.

The promise of the REGROW Act is essential to make all these dots disappear, with significant environmental, public health and quality of life benefits for surrounding communities and for the climate, while creating or retaining tens of thousands of oilfield services jobs.

A down payment on a big problem

The United States Environmental Protection Agency (EPA) estimates that methane emissions from over 2 million inactive, unplugged wells, of which documented orphan wells are a subset, range from a CO2 equivalent of 7-20 million metric tons per year (approximately the emissions of 2 to 5 million cars), and any reduction in methane emissions has an outsized short-term positive impact on the climate. This EPA estimate, however, raises the question: What about other inactive unplugged wells not on this map?

A full accounting of wells with no solvent owner of record might reveal more than one million orphan wells. There is also a large population of currently active, but low- or non-producing wells, which operators do not have the capital to plug (closure costs average $25,000-$75,000 per well), and are at risk of not doing so absent meaningful policy reform related to financial assurance and fees, idle well management and well transfer.

We have a long way to go before we’ve truly reckoned with the cleanup costs associated with the legacy of onshore oil and gas production in the U.S. But the REGROW Act is nevertheless a critical down payment on that work, which is essential for the environment and can play a key job creation and retention role during the next several decades of energy transition.

How you can help

Methane emissions from oil and gas wells, including orphan wells, remains a significant driver of short-term climate change—at least 25% of today’s warming is driven by methane from human activities.