Our new analysis indicates that New England electricity customers would have saved upwards of $3.6 billion between 2013 and 2016 if unused pipeline capacity had been available to deliver gas for electricity generation. Instead, it was unavailable due to a repeated pattern of last-minute scheduling changes by gas utilities owned by the same two parent energy companies.

To determine the financial impact of unused pipeline capacity on New England's electricity customers, we first assessed what gas prices would have been in the secondary markets – where many electric generators buy their gas – had that unused capacity been available. We then modeled how the wholesale electricity market operated by the New England Independent System Operator (ISO-NE) would have responded to these lower natural gas prices.

Step 1: Determine the natural gas price with a fully-utilized pipeline 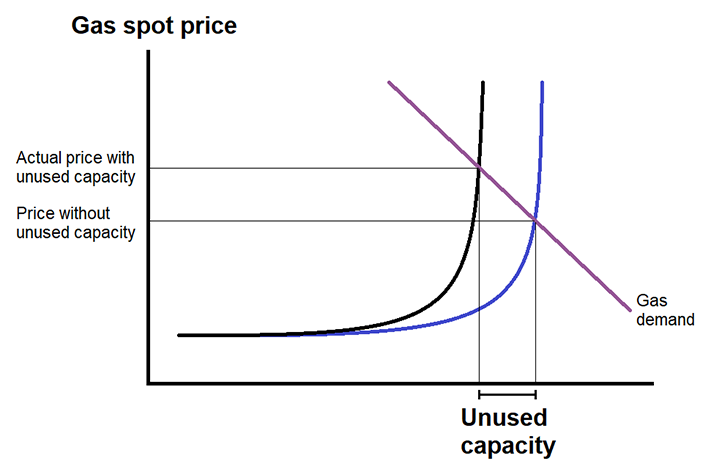 Figure 1. Simplified illustration of gas demand and gas supply in the spot market. The supply curve slopes steeply upward as the pipeline approaches its physical capacity constraint (blue line) or an artificial capacity constraint induced by scheduling patterns that block others from using the space (black line).

Using an econometric analysis technique called Instrumental Variables on data on demanded quantities and prices in the Algonquin Citygate spot market, we estimated a demand elasticity of -0.27.

Then, using that figure, we constructed a counterfactual Algonquin Citygate gas price series by taking the quantity of gas downscheduled late in the day from mid-2013 to mid-2016 as the hypothetical increase in the quantity of gas available to the secondary market.

To avoid overestimating the amount of unused capacity, we subtracted the daily average fraction of downscheduled capacity observed at all other nodes where systematic downscheduling was not apparent.

Adding downscheduled quantities back into the supply lowered the gas spot price as indicated by the price elasticity estimate of -0.27, as illustrated in Figure 1. We utilized this series of counterfactual gas prices as a determinant for the gas-fired generators' bids in our electricity simulation model (explained below).

Step two: Determine the electricity price with a fully-utilized pipeline

For these simulations, we used a dataset of 8 million observations of the actual bids of generators submitted to the ISO-NE day-ahead electricity market. For each hour of each day in our three-year period, each generator submitted a bid function specifying how much electricity the generator would produce if the price was $P1, and how much more it would produce if the price increased to $P2, etc. For each hour of each day in our three-year study period, we aggregated generators' bids to create a generation supply curve for the market, determined where that supply curve intersected demand, and recovered the equilibrium electricity price as the model's output. (See this blog post for an illustration of the generation supply curve and how the equilibrium price was determined by where demand intersected supply.)

To determine the impact of lower gas prices, we adjusted generator bids prior to aggregating using a resampling-matching algorithm. Broadly, this procedure consists of the following:

By multiplying this price difference by demand for each hour of each day and then summing it up, we can calculate the estimated additional cost to electricity ratepayers due to pipeline capacity underutilization. We estimate this cost to be $3.6 billion dollars over the entire three-year study period, with a 95 percent confidence interval between $3.2 billion to $4.1 billion.