By investing in it, we can lay the foundation for a clean energy future. A modern grid is more efficient, making better use of renewable sources of energy and harnessing many of the same digital tools we use to communicate.

Power outages in the U.S. cost customers billions of dollars each year. Weather – the main culprit – has increasingly affected the grid over the past 20 years, a trend that will likely continue.

New sensors, wireless technology and "set it and forget it" energy management tools – along with more access to energy data – enable utilities and the customers they serve to waste less energy and gain more control over their electricity use and costs.

The outdated grid vs. the modern grid

Here's what will lead to a modern grid

We're collaborating with a variety of partners to develop cost-effective ways that make the electric power system more efficient. They include: 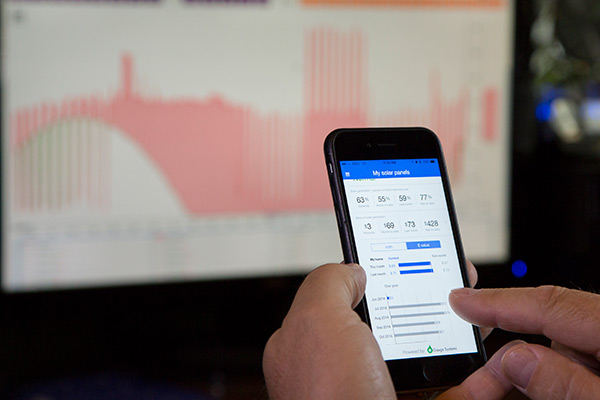 This smartphone is tracking energy generated by rooftop solar panels on a Austin, Texas, home, while a computer screen shows energy use.

Electric utilities can install technology, including sensors, to give people only the electricity they actually need, cutting down on energy waste.

Nearly half of all U.S. households are outfitted with advanced, or "smart," meters, which can send readings digitally.

Such meters allow for two-way, real-time communication that gives households and utilities the data they need to cut waste and costs.

Residents of one Austin, Texas, community – who have solar panels on their roofs and use an app to track their energy use – are seeing the benefits of this kind of technology.

As utilities begin to invest in smart meters and other grid-modernizing technology, they should measure success and demonstrate to customers and the public they are making the most out of these investments.

How can we expand these changes?

Primarily, we must remove obsolete rules that govern how power companies operate – rules nearly as outdated as the power grid itself. We’re working to fix these laws in places where we can have the greatest impact for people and the environment.

We'll send occasional updates about developments in technology, science and the environment.