As a non-political scientist I don't march – until now

By Ilissa OckoFollow
Ilissa is an EDF Climate Scientist.
Published April 25, 2017 in ClimateScience

Because I’m a scientist, politically-motivated public demonstrations are far outside of my comfort zone and actually against my nature.

I left academia to pursue scientific research that informs climate-related decision-making, but working for a science-based organization that’s committed to scientific integrity remains a requirement of mine. I have a strong desire to remain apolitical and a commitment to follow the data where it takes me, regardless of the outcome.

So it was out of character for me to join my life’s first politically driven march in Washington, D.C., in April 2017 – and to be gearing up for the next public protest a week later.

I turned down protests, until…

I’m a scientist and I don’t want my objective agenda to be fettered by any political agenda.

It’s why I didn’t attend the People’s Climate March in New York City in 2015, even though I lived in the area. And why I skipped this year’s Women’s March in Washington, although I now live outside D.C.

But something changed during the first several weeks of Trump’s presidency. Science was under attack, and this was not okay.

It crossed a line for me.

I originally became a scientist to make the world a better place, and I realized over the last few months that I could not stand idly by as science was rejected and threatened. As I watched fellow scientists and critical institutions crumble, I vowed to speak up.

As the 2017 March for Science drew closer, however, I found myself wrestling with a nagging question: Am I okay with politicizing science? Would I undermine my scientific credibility by involving myself in a political rally?

Through that internal struggle I came to realize that while science itself is and remains apolitical, it is crucial for guiding policy. And therefore the protection and support for scientists and research institutions is what I would be marching for. 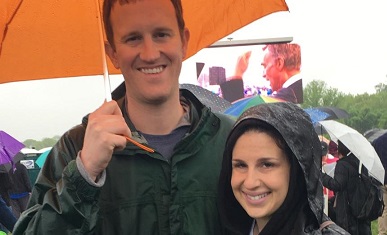 Ilissa and her husband Greg at the March for Science on April 22, 2017.

Even my scientist husband who stays away from politics even more than I do, woke up that Saturday and surprised me with his announcement that he would march, too.

We joined tens of thousands in Washington in support of science because science answers important questions about the world around us, such as telling us that climate change is real, human-caused and an urgent challenge.

And we marched again a week later in the People’s Climate March – so that we can take that warning from science and urge the government to take action to address climate change.

How a groundswell of citizen activism helped save the EPA

I'm curious how comfortable you were marching in the People's Climate March. The mantra "System Change not Climate Change" promoted by the organizers of that march seems way out of step with EDF's practical, non-alarmist, and economically based approach to addressing the projected problems associated with climate change.

For the record: I am a skeptic (climate change denier if you prefer, and no, I am not a holocaust denier) about the extent of human influence on climate over the last century and the likely negative impacts of projected warming. I understand the concern of those who think it is both significant and dangerous even though I disagree. I utterly reject western Socialist fantasies that overthrowing the capitalist system will result in better outcomes for climate emissions -- or for anything else except the power of the elites in charge of everything.

For those who disagree, first address the comparative environmental record of any Socialist "people's republic" in history including the current extant ones. The contrast is stark and if environmental concerns about climate or anything else are a priority -- Socialism has historically demonstrated itself to be exactly the system not to embrace.

I do not see how it is possible to not be politically aligned with the popular “climate change” movement. Science has been hijacked to counter capitalism. I am a Richard Feynman fan. I can’t find anyone like him today. Not even Kip Thorne. The hate is so intense.